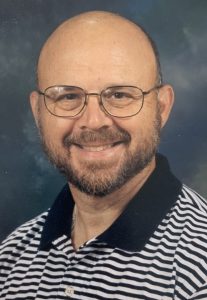 Charles Calvin Miller of Laurens, SC passed away Sunday, October 11, 2020, at NHC Laurens. Charlie was born October 19, 1950, in Greenville, SC, to the late Calvin Pierce and Miriam Sharpton Miller. The grandson of Pierce and Mabel Miller of Mountville, SC, and CB and Nettie Sharpton, of Clinton, SC, Charlie was a 1971 graduate of Wofford College and also earned a Master of Librarianship from the University of South Carolina. A lifelong educator, Charlie was an English teacher at Wagener-Salley High School and Laurens High School, a librarian at Bell Street Middle School, a technology coordinator at Clinton High School, an Assistant Principal at Thornwell High School, and an Adult Education instructor for Laurens County. Retiring after 36 years from SC public education, Charlie became the Clinton branch manager and Deputy Director for Laurens County Public Library System.

In 1973 Charlie married Elizabeth Roper of Laurens and they settled on their family farm in Laurens to raise a family: Alice in 1976 and David in 1978. The happiest years of Charlie’s life were spent on that farm with his wife and extended family, raising their families and farming. Charlie was a member of Westminster Presbyterian Church in Clinton and served his church and Lord faithfully as a Ruling Elder. He took great delight in his role of “Papa” to his adoring four grandchildren.

In addition to his parents and grandparents, Charlie was preceded in death by his sister, Margaret Miller James, along with Bob and Virginia Wier Roper. Charlie is survived by his wife Elizabeth Roper Miller, his children Alice M. and Lee Dorn of Evans, GA and David Miller of Aiken, SC; brothers Milford Miller, Dwight Miller (Molly), Robert Roper III (Barbra), and Houston Roper (Lindsay); a sister Ruth Roper; four grandchildren: Caroline, Robert, Ruthanna, and Margaret Dorn, and numerous nieces and nephews. The family would like to extend their sincere gratitude for the love and care provided Charlie by the staff of NHC Laurens and Caris Hospice.

A graveside service will be held at Laurens City Cemetery (North Harper St, Laurens, SC) on Thursday, October 15, 2020, at 3:00 pm. The family requests masks and social distancing practices be observed.

Memorials may be made to Westminster Presbyterian Church, Clinton, SC, or to Juvenile Diabetes Research Foundation (www.jdrf.org). The family asks that you remember Charlie by always enjoying fried chicken, deviled eggs, sweet tea, and by singing just a little bit louder on the last refrain of your favorite hymn next Sunday. All of those things, along with his family and his faith, brought Charlie a lifetime of joy and love.