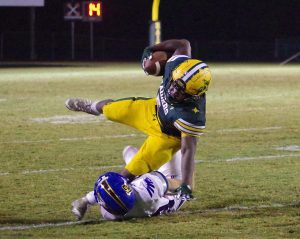 The Raiders (1-2 overall, 1-2 Region 2-4A) overcame a lackluster first half that started with a fumbled kickoff return to open the game for their first win of the season. LDHS lost to fifth-ranked Greenwood and No. 3 Greenville to open the season.

Eastside took a 7-3 lead into the half, but sophomore quarterback James Rawl connected with Jayden McGowen and Cason Elledge on third-quarter scoring strikes to put the Raiders ahead for good. McGowen scored on a 26-yard catch and run with 8:31 to play in the third quarter as LDHS took a 10-7 lead.

After T.J. Garlington recovered and Eastside fumble at the Eagles’ 31 yard line, Rawl and Elledge immediately connected on a scoring pass to stretch the Raiders’ lead to 17-7 with 8:06 left in the third quarter. 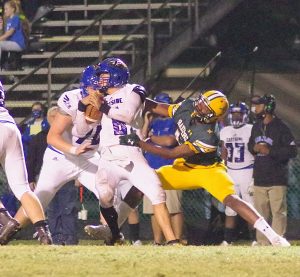 Eastside (0-3, 0-2) cut the LDHS lead to 17-14 in the opening minute of the fourth quarter, but McGowen answered with an 80-yard touchdown run to give the Raiders the cushion they needed with 6:46 to play. The Eagles managed a safety inside of five minutes to make it a one-score advantage for LDHS, but could get no closer.

McGowen led LDHS with 84 yards rushing on just three carries, and Elledge led the receiving corps with three catches for a team-high 75 yards.

Rawl connected on 11 of 19 pass attempts for 147 yards and an interception. The sophomore has now thrown two touchdown passes in each of his last two games.