From the Wednesday, Sep. 23 issue of The Advertiser. 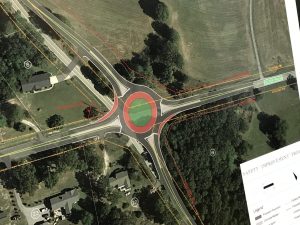 Commission of Public Works received word from the State Department of Transportation that the traffic circle which had been tentatively planned for the west side of Laurens is on go, and the utility needed to start plans to reroute natural gas lines in the area.

Explaining it would decrease accidents, the DOT has for more than a year discussed the possibility of putting in a traffic circle at the intersection of Hwy. 76 West, Trinity Church Road and Dial Place, and changes in the roads would mean several utilities lines would have to be moved.

“We had not begun work until we knew for sure that the DOT was going to get started on it,” said CPW General Manager John Young, “so now we have 60 to 90 days to begin the work.”

DOT expressed that it would like to begin making the road changes in the spring, and potentially have the road safety project completed by May or June of 2021.

The lines impacted include about 1500 feet of natural gas lines and will cost about $150,000, Young said.

“Unfortunately the DOT doesn’t pay us for these changes, so it will have to be passed on to customers. And it’s not just us,” Young said, adding that PRTC, Laurens Electric Co-op, Duke Energy and Laurens County Water and Sewer are among the other utilities which will be rerouting lines to accommodate the road changes. CPW already has a contractor lined up to begin the work and it should begin within the next two months.

The CPW also reported to commissioners that most of the high pressure sodium street lights along the main thoroughfares into the city have been replaced with LED fixtures. As other residential streets lights go out, they will also be changed to LED fixtures.

“We have replaced about 200 street lights on East Main, West Main, Farley and Fleming,” Young said, explaining the primary thoroughfare lights needed to be uniform.

The work will reduce both power and maintenance costs for the city and the commission.

“The LED uses about a third of the electricity and lasts about 10 times longer than sodium vapor lights,” Young said. “The biggest expense for us has been in replacing the existing lights, because every 18 to 24 months our trucks and staff have to be out replacing bulbs. It’s a significant operational expense and this will cut back on that drastically because the new lights will last much longer.”