From the Sept. 23 issue of The Laurens County Advertiser 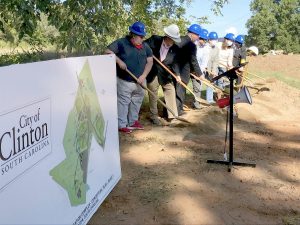 of Clinton staff and council members at a Tuesday morning ground- breaking ceremony for the long-awaited sports complex, where contractors are already working on road preparation and grading for what will eventually be five baseball fields, two multi-purpose fields and a pavilion which can serve as a location for family reunions and other events by Clinton residents.

Mayor Bob McLean said this project couldn’t have happened without a decision made in 2008, when city council voted to establish a one-cent hospitality tax.

“That one-cent tax has grown to $5,328,000 today, and is the source for not only building this park, but also maintaining it,” McLean said.

In order to build the estimated $4 million sports complex, the current city council voted to purchase 166 acres of property on the outskirts of Clinton off of Hwy. 56N, McLean said. 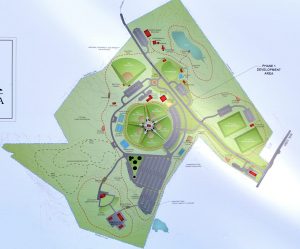 McLean also thanked Monte Dutton, who was willing to negotiate in the sale of a large portion of his family’s property for the city’s recreational facilities.

“His property was not for sale but he made sure we were able to acquire the property necessary to build this park,” McLean said.

“We have wanted this to be available to all our citizens, no matter what their physical capabilities are,” McLean said, adding that in addition to the ball fields, the complex will have 2.6 miles of walking paths, a 2-mile bike trail, a mountain bike trails, a gazebo for family events and eventually, a 3,000 seat amphitheater.

City Manager Bill Ed Cannon said the ball fields and the road are the first order of priority, and another con- tractor will be brought in to install the underground utilities needed for a two-story press box with restrooms and concessions stands that will be located at the center of the five baseball fields.

Cannon said he was planning to come to council at the next meeting to request a change order for the multi-purpose fields, as construction costs have gone up during the COVID-19 pandemic.

“We hope within a couple of months that we will have the grading done for the ball- fields, and a base coat on the road,” Cannon said.

The amphitheater is in a later phase of the complex and, excluding the amphitheater, Cannon hopes the city can complete first phase construction for no more than $4 to $4.5 million.