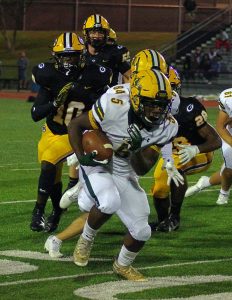 The win was the first for former LDHS head coach Chris Liner as head coach at his alma mater, Greenwood, and spoiled the Raiders head-coaching debut of Daryl Smith.

LDHS tied the score at 7-7 on a 1-yard plunge by Jayden McGowen with just over 10 minutes left in the second quarter, but that was the only time the Raiders were able to find the end zone all night.

“We’ve just got to get more consistency,” Smith said. “We just couldn’t get it in the end zone. We bogged down  when we got toward the red zone on a few good drives. We just couldn’t punch it in.”

Greenwood sophomore quarterback Jaylin Tolbert connected with senior fellow sophomore Ahmari Coats on a 38-yard touchdown pass with 4:53 left in the first half to go up 14-7. 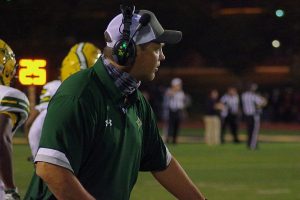 The Raiders threatened before halftime but LDHS sophomore quarterback James Rawl was picked off by Stevie Scurry at the Greenwood 19 with 2:40 remaining in the half to thwart the drive.

The Eagles (1-0) scored on the opening possession of the second half, capping the scoring drive with a 17-yard touchdown scamper by Tolbert with 8:24 left in the third quarter.

LDHS (0-1) kept the ball for six minutes on its next possession, marching 62 yards to the Greenwood 23 before turning the ball over on downs with 2:09 left in the third quarter. The Eagles answered with a quick score as Chris Simmons scored on an 83-yard run on third-and-16 play he broke open off of left tackle.

Another Raiders turnover set up a second Tolbert touchdown run to put the Eagles ahead 35-7 and end the scoring with 6:39 left in the game.