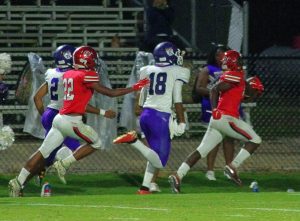 Senior running back Kimon Quarles scored on a 7-yard run in overtime to lift Clinton to a 32-26 victory over a stubborn Emerald team Thursday night at Wilder Stadium.

The game was an unexpected season opener for both teams, whose scheduled opponents – Union County (CHS) and Broome (Emerald) – temporarily halted football activities due to positive COVID-19 tests within their programs.

Quarles and Shy Kinard scored two touchdowns apiece and Jykorie Gary scored on a 90-yard kickoff return in the first quarter to lead the Red Devils. Kinard rushed for a team-high 121 yards on 20 carries for CHS.

“Our offensive line played their tails off and you can’t ask for more from a team than that,” said second-year CHS head coach Cory Fountain. “Our backs were against the wall, and we never quit.”

Emerald’s new option offense was effective in the first half as running backs Zac Elmore and Jaylen Foster combined for over 200 yards on the ground as the Vikings took a 20-13 lead into halftime. Foster finished with a game-high 166 yards and two touchdowns on 26 carries, and Foster 130 yards and two scored on 19 carries.

“In the first half, they ran through us like water,” Fountain said. 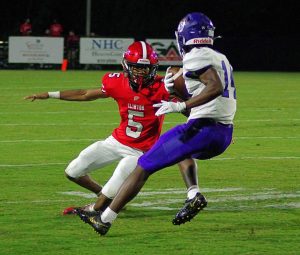 But defensive adjustments and improved execution coupled with a couple of key turnovers helped shift the momentum for the Red Devils, who tied the game at 20-20 on a 1-yard run from Kinard with three minutes left in the third quarter.

Emerald (0-1) answered with a 12-play, 72-yard drive capped by a 23-yard scoring scamper from Foster with 8:40 left in the game, giving the Vikings a 26-20 lead after the extra-point attempt failed.

Not to be outdone, CHS (1-0) marched 62 yards on seven plays on its next possession to tie the game at 26-26 after a missed extra point with 6:53 left in regulation.

The CHS defense forced its second fumble of the half on Emerald’s next possession. Hezekiah Kinard recovered it at the Emerald 40, but a potential game-winning 42-yard field-goal attempt by J.P. Snellgrove missed wide with 32 seconds left in regulation.

In overtime, Emerald got the ball first, but lost five yards on first down thanks to Xavier Boyd’s second tackle-for-loss of the game. The Vikings’ attempted a 27-yard field goal on fourth down, but the kick was blocked, and Quarles scored on the Red Devils’ ensuing possession to end the game.