LDHS running back Zy Todd gains yardage in a scrimmage against Chapin. The Raiders open their season at Greenwood and former head coach Chris Liner Friday.

The start of the 2020 high school football season may have been delayed by a few weeks, but Laurens District High School won’t have to wait any longer to get reacquainted with former head coach Chris Liner.

The two rivals will face off at 7:30 p.m. Friday night at Greenwood’s J.W. Babb Stadium.

Liner, who coached the Raiders to a region title in 2019, accepted the job at his high school alma mater in January. He spent six seasons with the Raiders, accumulating a 34-35 record. He was named Region 1-5A and state Coach of the Year in 2019.

“It’ll be a lot like practice was last year, I guess,” said LDHS head coach Daryl Smith, who was elevated from his defensive coordinator post after Liner’s departure. “Our defense will be going against their offense – that flex-bone – and it’s going to be tough. It’s a tough offense to get ready for, especially when you’re just doing it in a week.”

The Raiders, who were ranked No. 10 this week in the season’s initial Class 4A coaches’ poll, used that offense and a strong defense led by Louisville signee Duane Martin at linebacker in a 21-7 victory over the Eagles in 2019.

The Raiders have switched to a spread offense under Smith. The new-look offense will be triggered by sophomore quarterback James Rawl, Jr., who has a cadre of talented receivers at his disposal.

While Martin, a tight end at Louisville, and several other defensive starters are now on collegiate rosters at places such as Brevard and Presbyterian, are gone, the Raiders defense is anchored by senior defensive linemen T.J. Garlington, Scoon Mosely and John Brown up front and defensive backs Jayden McGowan, Nick Humphries and Isaac Craig.

A scrimmage against Chapin and a jamboree against Spring Valley gave Smith a preview of his team, and left him in want of more consistency on both sides of the ball on the eve of Week 1.

Like last year at LDHS, Liner has a group of talented athletes at Greenwood, including junior Jaylin Tolbert, who has apparently won a three-way preseason battle at quarterback that included incumbent Daylan Rappley for the Eagles. But both players could see time at the position and at receiver.

“He’s a tough kid – and he’s got to be in that style of offense – and he’s fast,” Smith said. “If you make a mistake, he can make you look silly. And he can throw the ball real well. It’s not like they’re one-dimensional.”

In addition to coaching changes and changes to the season affecting everything from ticket sales to scheduling brought on by COVID-19, the Raiders also make the move from Class 5A to Class 4A.

The shift to Class 4A in the offseason will give LDHS more equal footing against schools who are closer in population size to LDHS. In addition to Greenwood, the Raiders will face Greer, Eastside and Greenville in their new region. 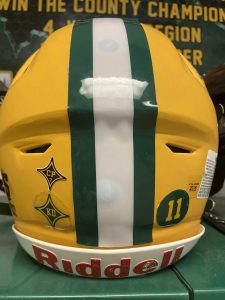 This season, the Raiders will honor the late King Dixon and Charles Peterson with helmet decals. Dixon, a former Laurens High and South Carolina football star, and Peterson, a 1991 state finals hero and top draft pick of the Pittsburgh Pirates in 1993 after graduation from LDHS, both recently passed away. Dixon died of cancer at 83, and Peterson, 46, died of COVID-19.

Here is a look at Friday night’s game: