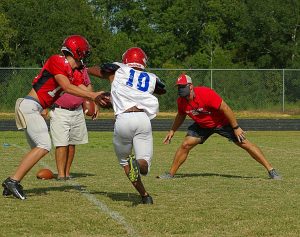 Clinton head coach Cory Fountain works with backs during a recent practice. The Red Devils host Emerald Thursday night in the season opener for both teams.

With little more than a week before Clinton High School’s 2020 football season was to begin, COVID-19 threw a wrench into the Red Devils’ plans.

Due to a confirmed positive COVID-19 test within the program at Union County, the Yellow Jackets shut down football activities through at least Sept. 29, leaving CHS without a Week 1 opponent.

Enter Emerald, whose own planned season opener against Broome was postponed when the Centurions shut down football activities due to COVID-19.

The Red Devils and Emerald will open the 2020 season against one another Thursday at 7:30 p.m. at Wilder Stadium. A limited number of tickets are available for purchase prior to the game, but attendance will be limited. Masks and social distancing will be required at the stadium.

“We’ve had to switch gears a little bit,” said CHD head coach Cory Fountain, who is entering his second season with the Red Devils. “We were preparing for Union, so that’s who we were focused on, but we have to learn how to adapt and adjust with COVID and things surrounding it with the protocols and all of that. Now, we have to be ready for Emerald.”

Dubose brings with him a winning pedigree and an option offense from Abbeville.

“Emerald is going to look a lot like Abbeville,” Fountain said. “They’re going to be running out of the shotgun with a double wing. On defense, their front four may be one of the best we see all year.”

The Red Devils were 4-7 in Fountain’s first season as head coach in 2019, finishing fourth in Region 3-3A and losing to Camden in the first round of the Class 3A state playoffs.

Fountain will be depending on an experienced group of backs, including Kimon Quarles, Jykorie Gary and Shyquan Kinard while he hopes a young offensive line develops quickly as CHS jumps into a shortened region-only schedule.

“That’s our most experienced group,” Fountain said. “Those guys are going to have to carry the load.”

Davis Wilson returns at quarterback to trigger the CHS offense.

Here is a quick look at Thursday night’s game between CHS and Emerald: