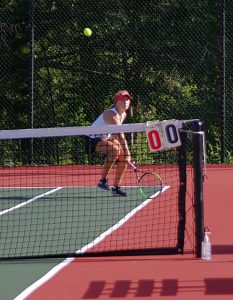 The Clinton High girls tennis team began a season unlike any other with dominating wins over Union County and Broome this past week, proving that the more things change the more they stay the same.

The Red Devils scored a 5-1 victory at Union County on Sept. 1 before starting their home season Thursday with a 7-0 shellacking of Broome.

As it has with other high school sports and activities, COVID-19 played havoc with the usual preseason preparations of the Red Devils, a perennial region power and state semifinalist from a year ago.

Despite “social distancing” being inherent in the sport, the players’ offseason was still extraordinary as the South Carolina High School League cut out organized practices for all sports.

“Our girls worked hard to get on the court a lot even though we were under COVID guidelines,” said CHS head coach Clovis Simmons. “They still played some tournaments – when they were offered.”

Simmons said how far the Red Devils go in this year’s state playoffs after a shortened regular season, which consists of conference matches only, will depend on how quickly the team’s youth develops.

CHS has no seniors on its roster, which consists of five juniors, four sophomores and three freshmen.

Sophomore Mary Catherine Daily is entrenched at No. 1 singles and has yet to drop a game in the Red Devils’ first two matches. The rest of the singles tree is made up of Ana Maria Rincon at No. 2, No. 3 Chandler Dailey, No. 4 Reese Gowan and No. 5 Gracie Spangler.

Doubles is anchored by the team of Ella Adair and Gracie Wiggins at No. 2. Mary Catherine and Chandler Daily team up at No. 1 doubles.

The Red Devils are expected to compete once again for the Region 3-3A title along with Chapman, who defeated Clinton in the state semifinals in 2019.

Clinton (2-0 overall, 2-0 region) flexed its muscle Thursday against Broome, not dropping a single game in a sweep of the Centurions. The Red Devils will find out early enough how they match up against Chapman. The two teams will meet in Inman on Sept. 14, and Clinton will host the Panthers on Sept. 24.

Despite the challenges and interruptions surrounding COVID-19, Simmons said she and the Red Devils are happy to be back on the court as a team this fall.

“This is what I say – this is where I want to be,” Simmons said. “This is where I am fed, and where they are fed – mentally physically and socially. So, we’re glad to be out here.” 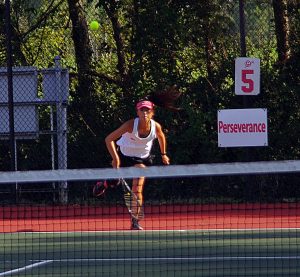 Reese Gowan serves at No. 4 singles against Broome Thursday.