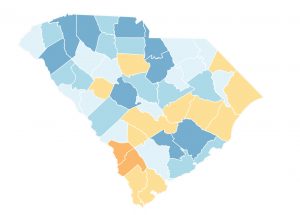 The self-answered census rates in South Carolina range from Allendale County at 38% to York County at 68.9%.  Laurens County is at 55.5 %.

During last week’s regular August meeting of Laurens City Council, council members were challenged by Carolyn Calwise, a regional Census 2020 official, to treat the census as if they were campaigning for their seats on council.

“Do what you did when you wanted to get elected,” Calwise said during her telephone call presentation to council. “Visit the people in your districts and explain the importance of the census.”

While the initial deadline for census data collection was postponed from spring to the fall due to COVID-19, Calwise’s encouragement to council is in reaction to the fact that the final collection date is now only a month away. There is growing concern among local officials about how a low census count could affect federal funding over the next 10 years.

Currently, the national census self-response rate is now at 64.6%, but only 58.5% of South Carolinians have sent in their census data, Calwise said. Laurens County’s rate is at only 55.5%, and at those low rates, Calwise said that Laurens County and its residents risk losing significant federal dollars which pay for important programs.

The funds include money for teachers and teacher training, schools and reduced lunches and Medicare, as well as infrastructure such as roads that help everyone in Laurens County, Calwise explained.

“In 2010 more than a million children were undercounted, which leads to overcrowding in schools,” Calwise said.

The Covid shutdown came just as many of the paid census workers would have begun combing the neighborhoods looking for families who had not yet submitted their information. Because of the pandemic, those face-to-face meetings were greatly reduced.

Mayor Nathan Senn said having just over half of the city’s population counted is a serious concern because in addition to the loss of federal funding for infrastructure and programs, industries and developers use census data when considering locations for their projects.

For information on how to respond to the 2020 census and information on the safety of data, go to www.2020census.gov/. Residents can also call at 844-330-2020 and complete the short survey.

See more from the monthly meeting in the Wednesday edition of The Laurens County Advertiser.