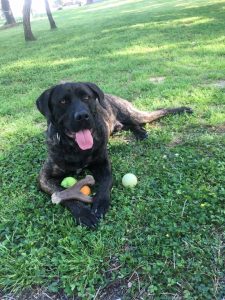 Champ is living his best life and is in a contest to become America’s favorite pet.

The adventure continues for Champ, a former Laurens County dog that made national headlines after being nearly starved to death before he was saved by local law enforcement and a national rescue organization.Anyone can vote

Champ, who has been adopted and now lives with his new owners in Delaware, is a contestant in “America’s Favorite Pet” at americasfavpet.com and he’s currently in first place in his group. The winner of the online vote, which serves as a fundraiser for  will receive a $5,000 prize and will appear in Dogster magazine. Currently Champ is in first place in his group and the Vote for Champ page is at https://americasfavpet.com/2020/champ-7.

Champ is also star of the Facebook page, Justice for Champ, which shows how far he’s come. The page has more than 51,000 followers. 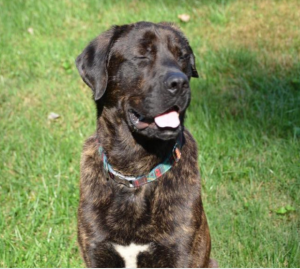 Champ as pictured in his America’s Favorite Pet voting page.

“Champ is the ultimate ‘come back’ story,” the description of Champ, a Mastiff mix, for the contest reads. “From being (allegedly) intentionally starved to near death, rescued by Rescue Dogs Rock NYC and nursed back to health by loving medical teams, Champ has recovered to be healthy and strong, but moreover is obedient, playful and great with everyone. He is always up for an adventure (recently traveled all across America from coast to coast), but is also completely content to snuggle at home.”

In October of 2018, the dog now called Champ was discovered chained, emaciated and too weak to stand after a neighbor reported the situation to Laurens County Animal Control. He was about 50 pounds under weight and infested with maggots.

A Laurens woman, Elizabeth Lena James, faces felony animal abuse charges after being indicted by a grand jury in December of 2018. She is accused of intentionally starving the dog as an act of revenge against its owner, her ex-boyfriend.

A trial date is still pending.