Reagan Williamson graduated from Laurens Academy a couple of months ago, but her career with the Crusaders isn’t over quite yet.

Williamson, a decorated all-state point guard with a pair of South Carolina Independent Schools Athletic Association state championships on her resume, I set to join the LA basketball program as an assistant coach while attending school at Greenville Technical College. 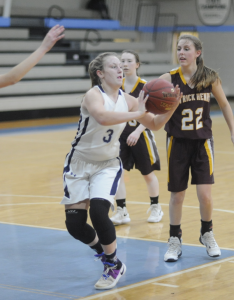 Former player Reagan Williamson (3) is joining the Laurens Academy as an assistant coach.

“I really wanted to be a part of it because people don’t understand how our program is from the outside,” said Williamson. “Once they’re in it, they understand why we do what we do.”

Williamson and Blair Quarles, who has signed to play basketball and compete in rodeo at Erskine, were the senior leaders on the 2019-20 edition of the team, which made it to the state semifinals after winning back-to-back SCISAA Class A state titles.

Williamson said she had conversations with LA girls head basketball coach Jason Marlett about joining his staff when she was still on the roster. After graduation, she said the two began to have more earnest discussions about it.

“As a player Reagan embodied the spirit and toughness that are foundations of our culture,” Marlett said. “Her maturity, understanding of the game and experience makes her a great role model for our players. They look up to Reagan. We are all excited to have her join us in leading our program as a coach.”

Williamson, who plans to study X-ray technology at Greenville Tech, will be coaching some of her former teammates, but said she doesn’t think that will be a problem for them or for her.

She agreed that she was an extension of Marlett – a coach on the floor – for the Crusaders as a player.

“I was known as a leader, and when I took that role as a player, it was different,” Williamson said. “I had to coach most of the time. … Basketball has been the biggest thing in my life for the last seven years with that program, and I want to keep it going and stay in it. I feel like my basketball IQ is pretty high because of my experience, so I wanted to help share that with younger players.”

LA has held summer workouts in all of its sports, and Williamson, who joins Sandy Moore as an assistant on staff, has been involved, working with the middle school players as well as the varsity team she just left as a player.

“I’ve always had this in my heart,” Williamson said. “I’m really excited.”