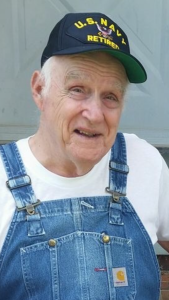 William Douglas Flowers, age 82, of 110 Cottage Court, and husband of the late Betty Jean Flowers, passed away on Saturday, August 1, 2020, at NHC of Laurens.

Born in Shellhorn, Alabama, he was a son of the late William Lester and Pliney Myrtle Little Flowers. A U.S. Navy Vietnam Veteran, Mr. Flowers served on several ships including the U.S.S. Mount Baker and the U.S.S. Dewey. From a young age, William had a passion for Ham radios and he took that passion and served the U.S. Navy for twenty-five years proudly obtaining the rank of Chief. Navy ran deep in his veins and was a way of life. He was honored to have served his country. After his military career, he later retired as an engineer from Northrop Grumman.

Funeral services will be held 2:00 PM Thursday, August 6, 2020, at The Kennedy Mortuary Chapel conducted by Rev. Gary Craft and Mr. Titus Flowers. The family will receive friends at the funeral home one hour prior to the service. Mr. Flowers will have a burial at sea with Full Military Honors.

Memorials may be made to Tunnel to Towers Foundation at www.tunnel2towers.org.