A transition season as a Football Championship Subdivision independent between memberships in the Big South Conference and non-scholarship Pioneer League is proving to be a challenge for Presbyterian College during COVID-19.

Conferences at all levels of college football are adjusting their schedules as they attempt to cope with COVID-19. Many of them have opted to eschew non-conference games in 2020, leaving PC in limbo for at least seven weeks this fall.

PC announced Monday that seven of its games, including four home tilts, scheduled for 2020 have been canceled as programs pare back their schedules.

“The fluidity and unpredictability within college athletics being caused by the ongoing nationwide pandemic makes it difficult to predict what the 2020 football season may hold,” the PC Athletics Department said in a release. “Further scheduling updates will be provided when it becomes possible to do so.”

The cancellations leave road games against former Big South opponents at Gardner-Webb (Sept. 26) and Campbell (Oct. 31) and at Incarnate Word (Oct. 10) and at Southern Conference foe Furman (Nov. 7). The only home game currently remaining on the schedule is against Erskine (Oct. 24), which is to return to the football field for the first time since 1951. 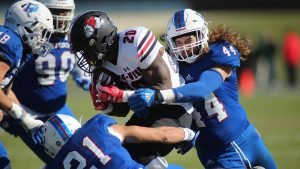 PC is to compete as an independent this season as they transition for one year from the Big South Conference to the non-scholarship Pioneer League in 2021.

In 2019, Campbell started all 12 games and tallied a Big South record 150 tackles on his way to all-Big South honors. He also set a Blue Hose record with 16.5 tackles for loss and a PC Division I record for quarterback sacks with nine.

Last year, Pearson led the Blue Hose in catches and receiving yards with 71 grabs for 777 yards, setting a new PC Division I record for receptions.

Haygood totaled 39 tackles and a team-high three interceptions, tying for the team lead with four pass breakups in 2019. He played in 10 games, starting nine.

Williams made 10 starts at the two tackle positions and played in 11 games, helping the Blue Hose to 131.2 rushing yards per game last season.

Wilhelm played in all 12 games a year ago, making eight starts. He finished with 53 tackles, six tackles for loss and four sacks.

Smyth played in all 12 games as a freshman with six starts. He tallied 63 tackles, 5.5 tackles for loss and an interception.

Simmons started all 12 games as a freshman in 2019. As a punt returner, the receiver had a team-high eight returns for 56 yards to go with six kick returns for 79 yards and 36 catches for 304 yards.

Presbyterian Head Football Coach Tommy Spangler announced this past week several additions and changes to the Blue Hose coaching staff.
Former Blue Hose defensive lineman Kamren Mack, a four-year letter winner, has returned to PC to join Spangler’s staff and coach the defensive line after a stint as a graduate assistant at Georgia State, while former Furman assistant Stewart Hunt joins the staff as running backs coach. Tymere Zimmerman has joined staff from the high school ranks to coach the wide receivers. Bryce Suber has joined the Blue Hose and will coach the secondary after serving in a quality-control role at Furman.

Along with these four additions, Pierce Spangler will coach the Blue Hose linebackers after coaching defensive ends for the past two seasons.

“Overall, we have a very young group of coaches this season. If you take out myself and (assistant coach Kent) Haltiwanger, we are really young,” Tommy Spangler said. “Great coaches develop like great players as it starts with a tremendous attitude and work ethic. I feel we have that with this football staff. I am very much looking forward to witnessing their growth and development as leaders of young men over the coming years.”