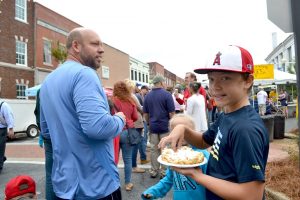 Austin Holtzee of Fountain Inn dined on funnel cake while his family waited for Britton’s BBQ during the 2019 Squealin’ on the Square. Photo by Judith Brown

Laurens, South Carolina – COVID-19 has claimed another casualty this year with the cancellation of the 2020 Squealin’ on the Square, the barbecue festival which serves as the primary fundraiser for Main Street Laurens.

“Our steering committee made the decision,” said Main Street director Jonathan Irick. “With the guidelines on social distancing, we just didn’t know how we could spread everything out and still make the numbers work.”

The festival takes close to a year to plan and, with more than 150 participating vendors, delaying the decision any longer was irresponsible, Irick said. 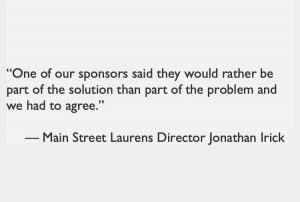 Barbecue and other bulk food vendors begin buying meat and supplies well in advance of a two-day festival, and craft vendors need to know how much product to have on hand.

“We have to take into consideration the vendors and we needed to give them a chance to make other arrangements so as not to leave them holding the bag with products they can’t sell,” Irick said. “It can be done quickly for a Finally Friday! event with just one band and telling businesses they don’t have to remain open but when you have businesses like carnival rides lined up and multiple bands and 150 vendors, it’s a totally different decision that cannot be made later.”

The cancellation was also not an easy call because the two-day festival serves as a crucial fundraiser for Main Street Laurens. It’s a non-profit which partners with the City of Laurens in many events but is not under the financial umbrella of the city. 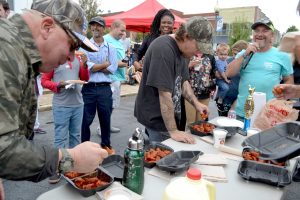 As usual, during the 2019 Squealin’ on the Square, the “Zaxby’s ‘Insane Hot Wings Challenge” brought out more spectators than participants. The 2020 festival has been cancelled due to COVID-19. Photo by Judith Brown

The volunteer committees which oversee Squealin’ on the Square had initially looked for ways to hold a scaled-back version of the festival, such as not holding the barbecue competition which is sanctioned by the Kansas City Barbecue Society. KCBS had its own long list of requirements because of the pandemic.

Clemson Extension has canceled events this summer, and the committee also realized it would need to cancel the popular Down on the Farm, which is run exclusively by 4-H volunteers as a fundraiser for Laurens County 4-H.

“The petting zoo and pony rides are very popular and are like an event within an event,” Irick said. “But CDC guidelines say you shouldn’t even have those.”

Discussions with corporate sponsors helped ease the decision-making process when several of them offered MSL the same funding they had already allotted for the festival.

“One of our sponsors said they would rather be part of the solution than part of the problem and we had to agree,” Irick said. “With (COVID) numbers going up, we are seeing other events canceled and since many of our volunteers are older, we weren’t sure they would even consider helping this year.”

It takes from 200 to 300 volunteers to put on a festival the size of Squealin,’ which attracts between 5,000 to 10,000 visitors to the small downtown, depending on the weather.

With the City of Laurens’ recent resolution to ask residents to take social distancing and mask-wearing more seriously, Laurens Mayor Nathan Senn said the city agreed it was probably the best move.

“The City of Laurens strongly supports this decision and the way it reflects our community’s commitment to working together to keep each other safe and healthy by preventing the spread of infection,” Senn said in a press release. “There will be plenty of time for celebration, but now is the time for determination and unity in defeating this virus. We look forward to the 20th annual Squealin’ on the Square being a very special event, breathing new life into our city’s biggest annual festival.”

The funds brought in from the festival help Main Street assist small independent member businesses in Laurens. MSL helps to attract new business to the Historic District, offers workshops and state-level resources for member-businesses, funding such as the recent COVID Utility Disbursement Grant this year, and facade grants in previous years.

While businesses have struggled, all those within the historic district have survived the shutdown and recovery period, although Irick said businesses have felt the loss of the MSL events such as Finally Friday! concerts and Sip ’N Stroll. The spring and summer events typically bring in hundreds of people to the downtown square and into businesses.

“Our businesses have really missed the events, and we are making plans for Christmas,” Irick said.