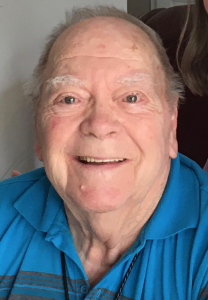 Bill was born on August 23, 1932 and grew up in Portsmouth, Ohio.  He left Ohio around 1951 to serve in the United States Air Force during the Korean War. While in New York in the Air Force he met his future wife. Bill and Betsy married on February 14, 1954 and started their life together in Ohio. Bill moved his family to Michigan after he found work there.  Bill and Betsy raised their 4 children and were active members at First Baptist Church of Trenton as well as working in their community to start new churches and help those less fortunate. Bill spent his spare time repairing things and working on his cars. He loved his truck and camper – taking his family on many incredible vacations. He worked at McLouth Steel in Gibraltar, MI until his early retirement in 1988.

Bill and Betsy retired to Anderson, South Carolina to the place where Betsy was raised. They built a log home and hosted many gatherings over the years with family and friends. In 2018 they made the decision to move to Tennessee to be closer to their son. They attended church at The Church at Station Hill and settled into their new routines. Bill loved to work jigsaw puzzles and no visit at the house was complete until a round of Dominoes was played. Bill loved his family and he loved God.

Funeral service will be held at 10:00 AM on Thursday, July 30, 2020 at Spring Hill Memorial Funeral Home. Visitation will be Wednesday, July 29, 2020 from 5:00 pm- 7:00 pm and one hour prior to service. Face masks are encouraged but not required to attend. Private interment at the Middle Tennessee State Veterans Cemetery. Memorial donations can be made to American Diabetes Association www.diabetes.org/ways-to-give.