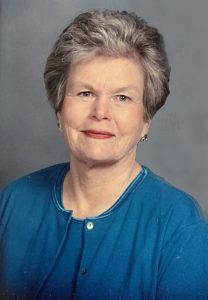 Born in Laurens on November 30, 1929, Dale was the daughter of the late George Hunter and Brucie Owings Blakely.

In July 1951, Dale and James Spears of Jonesville, South Carolina were married.

She was the loving mother of James C. Spears, Jr. (Denise) of Spartanburg; Blake Spears of Greenville; daughter Carolyn Culbertson (Thomas) of Blythewood; and five grandchildren.

Dale was a member of First Presbyterian Church in Laurens where she served as an elder and Stephen Minister.

As a resident of Presbyterian Home in Clinton, South Carolina, she enjoyed her friends, family and her cottage at the beach.