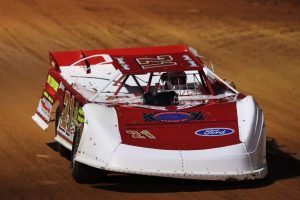 Frank Coates captured the checkers for the 100th time in the Late Model division at Laurens County Speedway Saturday night.

All of Coates’ victories have come in the speedway’s Late Model division.

Austin Watkins was second behind Coates and Steve Bowie was third.

A benefit yard sale is scheduled for Saturday, July 25 at the speedway parking lot.

All money will be donated to the persons injured in a June 27 race accident during which a car slammed into the stands, injuring four spectators.

Large items will be put into an online auction that will be held on the speedway’s Facebook page. The auction is to begin on Tuesday, July 21 and end on Friday, July 24.

GoFund me page for victim

A GoFundMe page has been set up for Ziyuana “Pie” Miller, who was injured in a June 27 race accident when a car crashed into the stands.

Four spectators, including Miller, were injured in the accident.

The funds raise will go to help her and her mother.