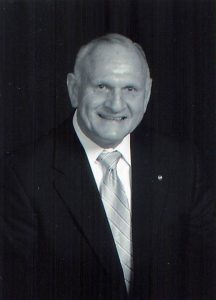 Albert King Dixon, II of Laurens, South Carolina, passed away on July 6 after a short battle with pancreatic cancer. He is survived by his wife of 61 years who was his sweetheart since the third grade, Augusta Mason Dixon; and his three sons, Albert King “King” Dixon, III (Kristina Halleck Dixon) of Stafford, Virginia; Augustus “Gus” Mason Dixon (Kim King Dixon and sons Andrew “Drew” Mason Dixon and Robert King Dixon) of Columbia, South Carolina; and Lee Simmons Dixon (Margaret Edwards Dixon and daughters Anna Dixon Massullo and Sarah Simmons Dixon) of Greenville, South Carolina. He was a fiercely loyal and devoted husband, father, and grandfather who instilled in his family his personal mantra of faith, family and service in all areas of his life.

King was known for his hard-driving passion and unquenchable enthusiasm in all that he did. He was an outstanding multi-sport athlete at Laurens High School, a football standout at the University of South Carolina, and player/coach of the United States Marine Corps football team. While attending USC, he also excelled academically graduating cum laude and Phi Beta Kappa, and was the recipient of the Algernon Sidney Sullivan Award. He later served at USC as the Associate Vice President for Alumni Affairs, Athletics Director during which time USC joined the Southeastern Conference, and most recently, as a member of the Board of Trustees. He was a Vietnam veteran and retired from the Marine Corps with the rank of Lieutenant Colonel after 22 years of service to his country, having earned a number of military citations for heroic service. His career also included service as the Executive Director of the Laurens YMCA and an executive with The Palmetto Bank.

Beyond his professional service, King loved being with and helping other people. He invested his life and served in leadership roles in a wide-variety of organizations in every city in which he lived: Elder and Sunday School teacher in the Presbyterian Church, Scoutmaster and local council President of the Boy Scouts of America (with all three sons and both grandsons earning the rank of Eagle Scout), coach of youth sports teams, Dixie Youth Baseball, District Governor of Rotary, Straight Street, Senior Laurens, Touchdown Club, United Way, Chamber of Commerce, Economic Development Corporation, Upper Savannah Council of Government, and South Carolina Association of Regional Councils, among others. He received numerous awards for his leadership and service, including the Outstanding Armed Forces Player of the Year; Athletic Halls of Fame for South Carolina, USC, and Laurens High School; South Carolina Order of the Palmetto; Silver Beaver of the Boy Scouts; multiple Rotary Paul Harris Fellows; and many other awards focused in particular on youth, civic and philanthropic service. Above all, he was a man of strong faith who believed he was God’s servant and who frequently attributed his accomplishments to the Lord – “to God be the glory!”

A service of thanksgiving will be held at First Presbyterian Church of Laurens, SC, on Friday, July 10 at 3:00 p.m. with only the family in attendance and live streamed for all others, followed by a private family interment with full military honors at Forest Lawn Cemetery. To view the live streamed service, click the link on King’s obituary at www.thekennedymortuary.com on Friday prior to the service. Memorials may be made to the First Presbyterian Church Laurens Endowment Fund, Blue Ridge Council of the Boy Scouts of America Endowment Fund, or the Rotary Foundation.