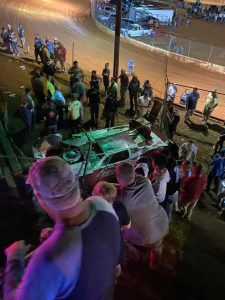 A Limited Late Model racecar is surrounded by a crowd of fans after crashing through a catch fence Saturday night at Laurens County Speedway. (Tyler Bowie Facebook photo)

Four people were injured Saturday night when a racecar crashed through a fence and into fans at Laurens County Speedway.

“There was an accident at the track tonight with a late model car. It did jump the wall and went through a fence and 4 were injured but there was no life threatening injuries. Please be in prayer for all involved. If the family allows, I will update as soon as possible,” the post read.

Two victims, including a teen-aged female, was airlifted to Prisma Health Greenville Memorial Hospital. Two others were transported to local hospitals by ambulance.

The accident occurred when a car racing in the Limited Late Model Division slammed through a catch fence near an area containing fans.