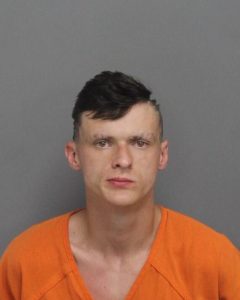 A Gray Court man was sentenced to 15 years in prison Thursday after pleading guilty in 8th Circuit Court for his role in trafficking methamphetamine in Laurens County.

Zachary Strange, 21, pleaded guilty to trafficking meth, possession with intent to distribute methamphetamine and possession of a stolen vehicle.

Strange was then sentenced to 15 years in prison by 8th Circuit Judge Donald B. Hocker as part of a plea agreement. Due to the nature of the charges, Strange will serve at least 85% of his sentence before becoming eligible for release.

“Hard street-level drugs like meth, heroin, and fentanyl are taking a wrecking ball to our communities in Laurens County,” said 8th Circuit Solicitor David Stumbo after the hearing. “Anyone who profits from the trafficking of these drugs must be stopped and held accountable, and we hope that this long sentence sends a message to those who are committing these crimes before it is too late for them.”

Strange was arrested twice on separate drug charges in 2018 and 2019.

The first incident occurred in August 2018. Officers were conducting an undercover narcotics operation

in Laurens. During the operation, Strange was arrested with 9.87 grams of methamphetamine in his

In May 2019, while out on bond for the first arrest, Strange was driving a vehicle that was reported stolen out of Greenville County. Strange bailed out of the vehicle when pursued by deputies, who discovered 211 grams of meth in the abandoned car. Strange was found by the deputies a short time later and taken into custody.

as fellow deputies from Laurens County Sheriff’s Office in helping secure the conviction in the case.