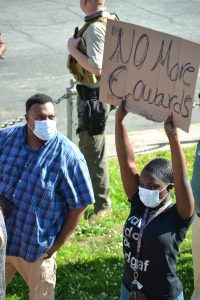 grounds of the Historic Courthouse Square early Monday evening, June 1, as the president of the Laurens County Branch of the NAACP spoke at a “Peaceful Rally” to honor George Floyd, the man who died after a Minneapolis police officer was filmed kneeling on Floyd’s neck.

Rev. David Kennedy was the guest speaker at the rally, sponsored by the Chimuranga Organization in Laurens.

Kennedy said the peaceful rally was important to let the elected officials understand that people of all races will not stand by in Laurens County while others are being treated unfairly. 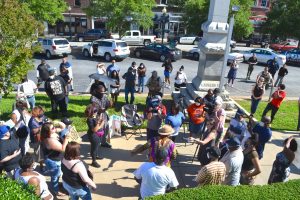 All photos by Judith Brown

“Thousands of people are protesting in the streets all over right now,” Kennedy said. “And don’t condemn the people doing wrong, because Dr. King said, ‘They are the voices of the unheard,’ and we need to let the elected officials know, ‘Your people need to be heard.’”

The group on the South side of the Historic Courthouse included whites and blacks of all ages, and many held signs calling for justice for Floyd and others who were wrongfully killed. More than a dozen law enforcement officers from the Laurens Police Department, Laurens County Sheriff ’s Office and the State Law Enforcement Division (SLED) were on hand at the protest.

One couple, Mary and George Smith who were formerly of 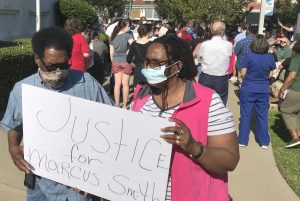 Laurens, held a sign for their son, Marcus Smith. Marcus was raised in Laurens County and killed at the age of 38 in Greensboro, N.C. while in police custody.

“We want people to remember Marcus, and we want justice for all these people who have been killed,” his mother said.

While Kennedy said dialogue is important, he sees effective protest as a way to “change the rules” that have continued to put more African Americans in prison. 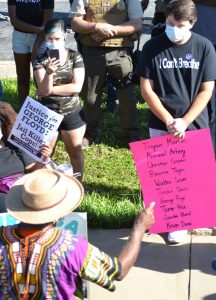 “The rules need to change so that if a white officer kills a man by kneeling on his neck, he will be jailed and charged without delay,” Kennedy said. Otherwise, “black people are going to continue to get killed and mistreated.”

Kennedy asked for comments from officers and elected officials, including Laurens Police Chief Chrissie Cofield Latimore, who expressed her sadness over Floyd’s death based on several factors.

“As the leader of Laurens Police Department the death of Mr. George Floyd is especially concerning to me,” Latimore said. “As a black female and the mother of a black son I understand the frustration and sadness, however I maintain faith in law enforcement and the judicial system.”

A second protest initiated by the Black Lives Matter group was scheduled for Thursday afternoon on the Historic Square. 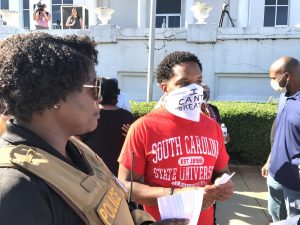 Latimore said that while there is still much work to be done in law enforcement, as the chief of the LPD she is “willing to question and denounce actions that are wrong so we can continue to build trust within our communities. But we as a community cannot allow the injustice that took place in Minnesota to cast a negative light on all officers. Laurens Police Officers are trained to treat all individuals, no matter their race, sexual orientation, creed or religion, with dignity and respect whether they hap- pen to be victims, suspects or witnesses. It doesn’t matter.”

Laurens Mayor Nathan Senn said when a communication problem exists, the City of Laurens wants to solve that problem and move forward. He explained that in this past year he and city council worked with Cof ield and “the city repealed an ordinance that dis- proportionately worked against those in the African American community,” Senn said. “I believe in doing what’s right and part of that is doing what we are doing here right now. It’s time to move forward in understanding, and I am com- mitted to do that.” 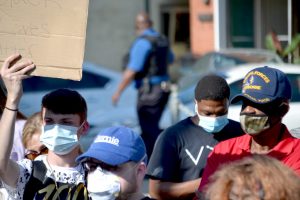 “We will always do what’s right in responding to the needs of all Laurens County citizens,” Reynolds said.

Kennedy encouraged many of those present to consider joining the Laurens County Chapter of the NAACP.

“White people started the NAACP,” Kennedy said, adding that he hopes to especially see more membership among the young people of Laurens County.