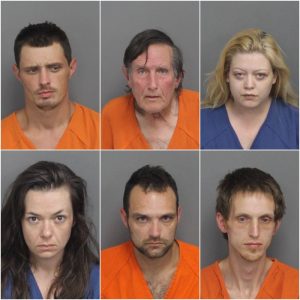 According to the LCSO, Emily Hamilton Nickles of Ware Shoals was charged with assault and battery of a high and aggravated nature and possession of a weapon during the commission of a violent crime.

Nickles is charged with shooting a woman in the leg. The victim was transported to a local hospital where she was treated and released.

Following the shooting, Nickles left the scene with a male companion and was later located in a vehicle in Cross Hill. They were pursued by LCSO deputies into Newberry and Saluda counties after attempting to evade a traffic stop, the LCSO said.

The driver of the vehicle, Jerry James Brown of Cross Hill, was charged with failure to stop for blue lights, secnd offense and driving under suspension.

At the LC Drive residence, deputies made four other arrests on various charges.

William Porter Whaley was charged with accessory after the fact of a felony, while Jesse Lee Harper, Jr., William Casey Whatley and Katherine Elaine Whatley were each charged with possession of a controlled substance.

Carolina Highway Patrol for their assistance in helping us apprehend these criminals. I also appreciate the work of our deputies and investigators in responding quickly and efficiently. I am very proud of the job that was done in a unified manner.”