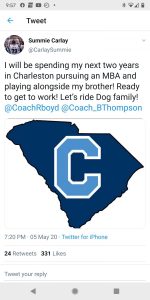 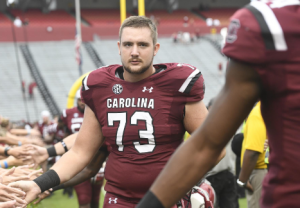 Former Laurens District High School standout offensive lineman Summie Carlay announced on Twitter Tuesday that he will transfer from the University of South Carolina to The Citadel.

Carlay will join his younger brother, Wesley Carlay, who is completing his freshman year at the Citadel and plays on the defensive line for the Bulldogs. Summie Carlay, 6-5, 285 pounds, is a graduate transfer and will be eligible to play immediately for Citadel head coach Brent Thompson.

“I will be spending my next two years in Charleston pursuing an MBA and playing alongside my brother!” Summie Carlay’s Tweet read. “Ready to get to work! Let’s ride Dog family!”

Carlay entered the transfer portal in order to transfer from the Gamecocks in mid-April. He was a sports and entertainment management major and three-time SEC Fall Academic Honor Roll recipient while at South Carolina.

Carlay, a former three-star recruit at LDHS (’16), played in all 12 games for the Gamecocks this past season. He chose South Carolina over offers from Coastal Carolina and N.C. State. He is among six former Gamecocks to transfer this offseason. That list also includes former starting quarterback Jake Bentley (Byrnes), who transferred to Utah.