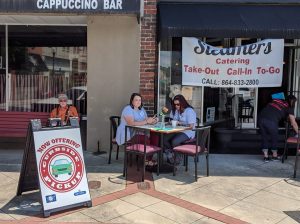 Taylor Estes, left, and Holly Szymanski have lunch Monday at Steamer’s in Clinton.

Taylor Estes and Holly Szymanski were on their lunch break outside of Steamer’s in Clinton, sharing the lone table set out on the sidewalk by the restaurant Monday afternoon.

South Carolina Gov. Henry McMaster had declared late last week that restaurants throughout the state would be able to serve diners outside beginning Monday as he began to loosen restrictions in place from executive orders to combat the COVID-19 pandemic.

The outdoor dining is seen as a step toward a to return to normalcy for the state, which continued to see increases in the number of COVID-19 cases and fatalities related to the illness across the state.

According to the state Department of Health and Environmental Control, the number of confirmed cases across the state increased by 93 Tuesday to 6,841 total since the beginning of the pandemic. The total number of cases in Laurens County increased by one to 42. The county has added three new confirmed cases over the past four days, but the second death attributed to COVID-19 in the county was an error made by DHEC, county officials said Monday.

Local restaurants such as Roma in Laurens and Steamer’s, the Vestibule Coffee & Tea and Waffle House in Clinton set up outdoor seating for customers, while others such as The Clock in Laurens have initially kept the status quo with drive-thru and to-go orders. Tables at Sonic drive-ins in Laurens and Clinton also remained out of use Monday and Tuesday.

Szymanski and Estes said the lunch break at a café table in front of Steamer’s was a welcome respite during their workweek at Woodbridge of Clinton.

“It’s just great to be outside and be able to enjoy the day,” said Szymanski.

A small crowd sat outside Roma on Monday for lunch and grew a little larger on Tuesday.

Szymanski said she believed it could take a little time for people to fill comfortable dining out again.

“People are scared,” she said.

The City of Laurens has also allocated space on the Historic Square for customers of the three restaurants there – Roma, the Capitol Theater and Main Street Bake Shoppe – and the Coffee Roost coffee shop. The city set up five tables with seating around the square.

Other non-essential businesses were allowed by McMaster to reopen this past week, but others such as hair salons, tanning operations and other businesses requiring close physical interaction remain closed.

State regulations ordered that the tables be eight feet apart and put other restrictions on outdoor dining.

“This is the first step that slowly we can get back to normal,” said Roma owner Yvan Youssef.

Like other local restaurants, Youssef said Roma had to adjust to serve its customers. With no drive-thru window, Roma was limited to curbside pickups and made some deliveries and had to shut down its bar.

“The first two or three weeks, we knew we could get over that, but after that we knew it would be a challenge because we had never experienced anything like this before,” Youssef said. “We were mostly dine in and serving wine and drinks at the bar. We had to adjust.”

Youssef also said he has about 75% of his staff currently working at least some hours during the week, and he hoped successful outdoor seating will lead to at least limited indoor dining in the coming weeks.

“We’re hoping in the next two-to-three weeks the virus will start dying slowly, and we’re hoping the start opening our dining room even at partial capacity,” he said. “I have faith. We survived (the economic downturn in) 2009, and I think we will get through this.”