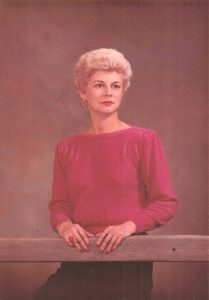 Corrie Jackson Grether, age 78, of 322 West Farley Avenue, and widow of Charles Michael “Charlie” Grether, passed away on Thursday, April 30, 2020, at her home.

Born in Laurens, she was a daughter of the late Thomas Wesley and Ada Ophelia Benjamin Jackson.  Corrie was a graduate of Warflynn Beauty College in Washington, DC and was the owner of Hair Fashions in Laurens for 53 years.  She was a member of First Baptist Church of Laurens where she belonged to the Cain Sunday School Class.  She was also a member of the Red Hat Rovers.

Graveside services will be held at 3:00 pm on Sunday, May 3, 2020, at Westview Memorial Park in Laurens conducted by Rev. Rickey Letson and Rev. Phil Hall.

The family will be at the residence.