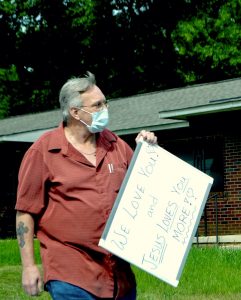 SOCIALLY DISTANT VOLUNTEERS — As part of a group of volunteers providing individually-boxed fresh pizza to the Hanson Circle community last week, fellow-resident Sam Smith walks toward the next apartment. Photo by Judith Brown

The early supper last week was the result of a coordinated effort by Bethany and Lydia Presbyterian churches in Clinton and Todd Memorial Presbyterian Church and Hanson Circle Chapel of Hope in Laurens.

“Just the volunteers being there makes such a difference,” said Hanson Circle Property Manager Daisy Thompson. “The fact that you have people in the community and the church community encourages them, because even if they have to go through difficult things, knowing people care about them helps.”

The suppers were funded by a grant acquired from the South Carolina Presbytery by a cluster of smaller membership Presbyterian Churches, and the volunteers worked along with a registered nurse to make sure all deliveries were done safely, said Rev. Herb Codington. Volunteers also included Sam Smith, a resident of Hanson Circle who, along with Robert Vance, checks on fellow community members and often will make visits to the local food pantries on behalf of their fellow residents.

“The people were very appreciative,” Thompson said. “I appreciated that the volunteers included a nurse. Especially since this is a senior population, they already have challenges, and during this time most of them can’t go anywhere and are dependent on others to make food deliveries.” 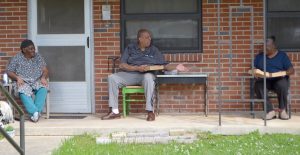 FAIR TRADE ANTICS — Hanson Circle resident Elizabeth Jones, at left, laughs as fellow resident Stevie Orr jokes with Sally Palmer, right, about trading pizza slices last week. The boxes of hot pizza were delivered to every Hanson Circle resident by a group of churches, who worked with the property manager and a nurse to assure safe delivery. Photo by Judith Brown

Codington said volunteers at the small food pantry located at Lydia Presbyterian, which is supplied through the Cluster of Smaller Membership Churches of Laurens County, are trying to provide at least a small bag of food items each week to the Hanson Circle residents. “Before the pandemic there was a hot supper provided almost every Sunday night at the Hanson Circle Chapel of Hope, and on Thursday nights area churches alternated providing meals off and on throughout the year,” Codington said. “Those dinners helped stretch the food budgets of residents but with the pandemic those have halted.”

Thompson said assistance from churches or individuals is always welcome, at Hanson Circle or at the sister-property Franklin Street Apartments in the Jersey Street community of Laurens. Both are under the umbrella of the South Carolina Regional Housing Authority.

“Franklin Street only has 12 residents and since it’s much smaller, the residents there are pretty tight and look out for each other,” Thompson said. “Hanson has 68 residents and we have a group within that senior community who try to see what the needs are and collaborate with each other. Robert Vance, Sam Smith and some others really care about the other residents within the community and I’m definitely a proponent of that.”

Anyone who would like to contact Thompson about ways to assist those within the communities can email her at daisyt@scrha.net.