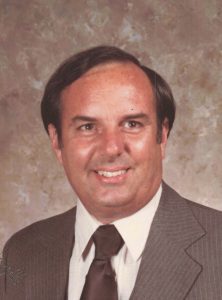 Jerry Dane Sparks went to his heavenly home on April 22, 2020.  Jerry was born on April 8, 1939 in Dallas, Texas to the late Merrill Dane Sparks and Barbara Lee Bailey Sparks.  After graduating Dallas High School and Crozier Tech, he enlisted in the Army and served as an aircraft mechanic while stationed in Germany. During his service, he was accepted to attend the United States Military Academy at West Point and attended the Military Academy Preparatory School. After his military commitment, he continued his college education and graduated from The University of North Texas in Denton, Texas.

After graduating college, Jerry relocated to South Carolina and spent most of his professional career teaching vocational education at high schools in Laurens and Greenville Counties. He took great joy and pride in teaching young people the skills of building construction, electrical and plumbing that could lead them to successful professional careers. He retired from Golden Strip Career Center in Mauldin, SC, both respected and loved by his students and fellow teachers.

Jerry loved his Lord, his family, the outdoors, helping others and making people laugh. He spent many cherished hours with family and friends fishing, boating and river tubing. Even though his health would not allow him to enjoy these activities in his later years, he delighted in telling and “re-telling” his favorite stories of the many times he spent with family enjoying the outdoors. His grandchildren and great-grandchildren knew him as “Papa J”, the guy who teased them about eating “porcupine pie” and “chicken ripple ice cream” and greeted them with a big Texas “Well Howdy Do”.  This special man with the unique sense of humor will be dearly missed.

The family would like to thank the nurses, nurses’ assistants and all the staff at Martha Franks Baptist Retirement Community, for their loving and compassionate care given to Jerry over the past four years.

A private graveside service will be held at Westview Memorial Park, Laurens, SC on Sunday April 26, 2020 at 2:30 PM, conducted by the Rev. Dr. Mike McCracken. Memorials may be made to Martha Franks Baptist Retirement Community, 1 Martha Franks Drive, Laurens, SC  29360 or to the charity of your choice. The Kennedy Mortuary, Laurens, SC is assisting the family and condolences can be made to the family at www.thekennedymortuary.com.