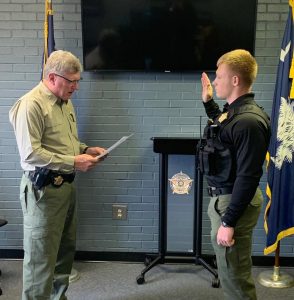 A toddler who wandered away from her Gray Court home Monday afternoon was found in short order by a Laurens County Sheriff’s Office deputy who had only officially been sworn in as a deputy a few hours earlier.

The 3-year-old girl was located about a mile from her home on Highway 92 in Gray Court about 25 minutes after deputies and LCSO K-9 units arrived on the scene.

Deputy Austin Crocker, who only recently joined the LCSO and was formally sworn into office by Sheriff Don Reynolds Monday morning, found the girl unharmed and in good condition at 1:05 p.m.

In the meantime, the K-9 units and deputies on the ground were joined by a drone in the air in the search for the girl.

“I feel like as a law enforcement officer, every day that I get get to help someone is a great day,” Crocker said by text Tuesday afternoon. “Deputies are always contributing to something much bigger than ourselves – helping the community.

“When I found the child, it really felt great. It wasn’t just about finding her but assuring her that she was OK when we finally did find her. That was our goal.”

Crocker had been doing ride-a-longs with other deputies in preparation for joining the LCSO’s patrol division, which became official Monday.

“This scenario just goes to show that we as law enforcement officers do not know what tomorrow will bring,” Crocker said. “And when something like this happens the Laurens County Sheriff’s Office comes together and conquers the situation. Without this team, I couldn’t have located her without everyone else pitching in.”

Reynolds had praise for his deputies for their quick response to find the missing child.

“The response today was phenomenal,” he said. “All available hands were on deck, the K-9 unit was deployed quickly, and the child being found safe was the best possible outcome. I appreciate the men and women who step up to the plate every single day, ready to take on any task. I am grateful that this child was located quickly and safely. There is no greater satisfaction than to see this child reunited with her parents.”