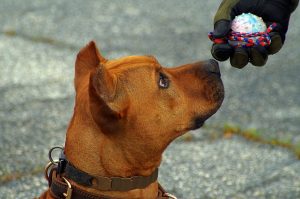 LCSO K-9 Hiro is intent on getting the training toy.

With his nose to the ground on a short tracking training mission, Hiro was among several LCSO K-9 officers participating in training this past week at Bell Street School in Clinton, but that almost didn’t happen.

Hiro was rescued from a Virginia shelter on the very day he was supposed to be euthanized by a trainer from American K-9 Interdiction, a training facility for work and service dogs located in Corrsville, Virginia near Norfolk.

“You take a dog that’s fixing to be killed and you turn them out and make him an explosive detection dog, and you just didn’t save his life because he has the potential of saving many other lives,” said LCSO K-9 Supervisor Shawn Davis. 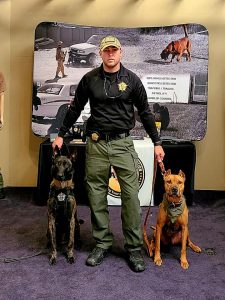 Hiro received his certification from American K-9 Interdiction as an explosives dog along with Davis as his handler in February and is now part of a team of LCSO K-9s that includes German and Belgian Shepherds, Bloodhounds and another newbie, a Labrador Retriever named Pete.

Davis said Hiro’s continued training is going well, but there are challenges. With no real knowledge of the dog’s pre-shelter life, life with Hiro has been a learning process.

His ears were docked by someone, so he struggles to stay on task in the rain because the noise of heavy raindrops hurt his ears. He also tends to mark his territory at every convenience.

“He’s been part of the street life for a long time, you can tell because he wants to mark his spot on every tree he sees,” Davis said. “He’s still got a street-life mentality, so we’re working to try and get that out of him.”

But the early returns show Hiro is making the most of his second chance. Davis said Hiro will make an excellent patrol dog, joining veteran K9s such as Diesel, Joeri and Suzy on the LCSO force.

Davis said the K-9 unit has proven its value time and time again as it tracked suspects, detected illegal drugs and aided in searches for missing persons. The LCSO is looking to expand the program with at least one other K9 and training for a handler. The unit is attempting to raise around $10,000 for the purchase of a new K9 and training for both the dog and handler. 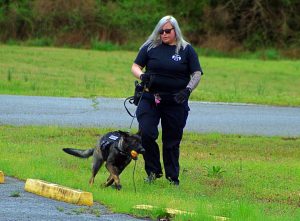 Diesel, who is handled by Sgt. Darin Boyd, is due to retire and the unit also needs to find his replacement. Liberty, a Dutch Shepherd who is handled by Deputy Amanda Alexander, came to the LCSO at no cost from York County.

As part of its K-9 Advancement Program, the LCSO is attempting to raise funds to defray the $10,000 cost of an additional K-9 as well as the estimated $2,500 per year it costs to for other necessities such as protective vests, housing and other essentials for the K-9s.