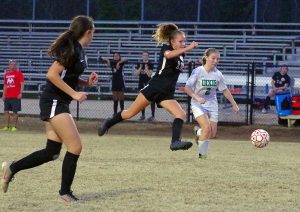 Clinton High striker Rachel Vondergeest (12) drives against Dixie Thursday in a 3-0 win. It may have been the last game this season for the Red Devils.

First, South Carolina Gov. Henry McMaster shut down public schools in the state through the rest of March, and then the South Carolina High School League shut down the spring sports seasons at least through April 5.

The closures were made due to threat of the COVID-19 virus pandemic. The Center for Disease Control is advising against large gatherings of people in an attempt to control the spread of the virus.

The SCHSL announced its decision to suspend the spring sports schedules, which include baseball, softball, boys and girls soccer, track and field, lacrosse and other sports, Monday. McMaster announced school closures Sunday afternoon.

“In order to keep our student-athletes and the education community as safe as possible, stringent measures are now in place by order of the Governor’s Office,” said SCHSL Commisioner Jerome Singleton. “We ask that all schools follow this Executive Order until further notice. We will reconvene via teleconference on April 2, 2020, to review the spring sports schedule,”

The decision to reconvene on April 2 gives some hope that the spring sports schedules can resume at some point.

But for now, the usual sounds and sights of spring on local athletic fields at Presbyterian College, Laurens District High School, Clinton High and Laurens Academy are silent.

The South Carolina Independent Schools Athletic Association (SCISA), which governs Laurens Academy and other private schools, suspended its spring sports schedules this past week. LA fields baseball and softball teams in the spring.

The NCAA suspended play in all of its spring sports championships as well as conference and NCAA basketball tournaments. The Big South Conference voted to suspend games, competitions and practices through the end of March.

“The health and well-being of our student-athletes, our university communities and our fans are foremost on our minds,” said Big South Conference Commissioner Kyle Kallander.

Conference member chancellors and officials will reconvene to weigh their next steps at the end of March and, “do everything reasonable that we can to save some semblance of the spring season,” Kallendar said.

LDHS scored a 10-0 victory over Wade Hampton Friday night, but coaches, players, administrators and fans knew the COVID-19 strategies could bring the end of the season.

“It’s going to stink for them – the seniors,” said LDHS head baseball coach Tori Patterson. “We just played our sixth game of the season, and for something like this to happen. I’ll be hurting for them for sure.”

LDHS Athletic Director Tommy Spires said the decisions at the state level are part of the bigger picture.

“We’re going to try and make it safe for our kids, our fans and our coaches, so, while we’re disappointed, we completely understand where we are right now,” Spires said. “We’re going to do our part and hopefully in a few weeks we might be able to get back out on the field.”

If the need for “social distancing” to fight the pandemic ends in the coming weeks, Spires thinks there would be time for SCHSL schools to play condensed schedules in an effort to salvage the spring seasons.

“Our hope is that this will be under control and that maybe we’ll be able to get them back out there before the year’s out,” Spires said. “We’re just kind of waiting like everybody else to see how this thing goes. The information changes on a daily basis – or even an hourly basis.”

On Monday, the SEC announced the cancellation of its spring sports seasons.