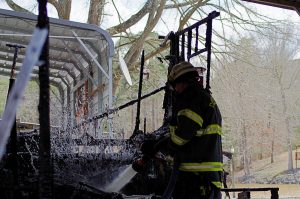 Roger and Phyllis Knox arrived at their lakeside getaway at T Roy’s Landing Monday in Cross Hill looking forward to a week of relaxation.

Within 20 minutes, those plans were interrupted when a heating unit malfunctioned in the couple’s camper, causing a fire that quickly destroyed their camper along with another on a neighboring lot.

“It was all gone within five minutes,” said Phyllis Knox, the tips of her hair singed from the fire.

She escaped uninjured. Her husband, Roger, suffered burns on his hand as he tried to stop the fire from spreading, but was treated at the scene and chose not to be transported to a local hospital. Another person at the RV park was treated for smoke inhalation, officials said. No first responders were injured.

“I told him to get out,” Phyllis said of her husband with the couple’s Chihuahua, Coco, at her feet. “We can replace everything else, but there’s no replacing him.” 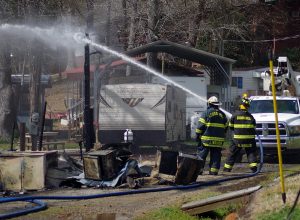 She said they had arrived at their camper from their home in Gaffney about 20 minutes before the fire started. They noticed an odd sound soon after turning on their heating unit.

The blaze quickly spread beyond their own camper as propane units at the neighboring lot caught fire and reportedly exploded before firefighters arrived.

Around a dozen volunteer and fulltime firefighters from Laurens County, Cross Hill, Joanna and Clinton responded to the call. Four engines from Cross Hill and a quick-response unit from the county were on the scene.

Those responding also included two newly hired full-time firefighters – Andrew Maag and Damon Norman – who were undergoing orientation during their first day on the job.

“We have a week of orientation before we put them out by themselves,” said Laurens County Fire Services Director Greg Lindley.

The new firefighters were recently requested by Lindley and approved by the Laurens County Council to work in the Lake Greenwood area due to a lack of volunteers.