Laurens, S.C. – Rev. Martin Luther King Jr. had a clear view of injustice because he lived among the people who experienced it, and former Ohio 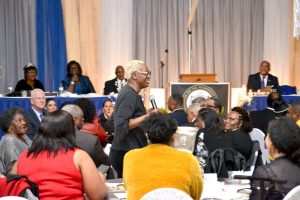 Former Ohio State Sen. Nina Turner walks through the audience as she speaks on fighting injustice. Photo by Judith Brown

Senator Nina Turner said that same vantage point is required to ever bring about change.

Turner served as the keynote speaker Saturday night, Jan. 18, as the Laurens County Branch of the NAACP hosted its 43rd annual Freedom Fund Banquet in Laurens. Bringing in more than 450 guests, the dinner included greetings by various organizations throughout Laurens County. State Senator Karl Allen emceed the event and chapter president Rev. David Kennedy and his executive committee gave numerous awards before the evening was complete. 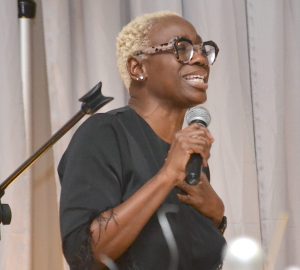 “Rev. King was clear about injustice, very clear about suffering, clear about organizing the poor people’s movement, a multicultural and multi-racial generation of folks,” Turner said, adding that regardless whether they are black, brown, indigenous or white, the poor have few opportunities and get caught in a endless cycle.

“So do you have a street view or a castle view?” Turner asked. “What troubles me is people who will quote Dr. Martin Luther King’s words but don’t want to follow him.
People want to talk about how beloved he was, but he was one of the most hated men in America until he was assassinated,” she said, adding that he sacrificed his life working for others.

“It is one thing to quote him and another thing to live like him, and those with power 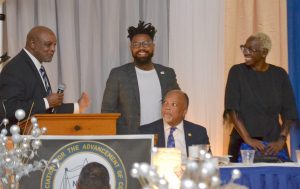 Turner said she believed “the creator of the
universe gave us two hands to lift up others as we climb.”
Following Turner’s presentation Regan Freeman of Columbia said he hopes that the non-profit he’s created, “The Echo Project,” will be able to raise sufficient funds so that the Echo Theater, which had been used as a theater for decades since the 1940s, can be transformed into a place that represents diversity in Laurens.
The Echo Theater was reopened in the 1990s and used as a Redneck Shop and Klan Museum, but for many years the deed has belonged to the New Beginning Missionary Baptist Church.
Awards presented during the evening included the Julia Pearson Membership Award to Shirley H.  Clark, the C.D. Beasley Sr. Service Award to Rev. and Mrs. Kennedy, the Recognition Award to William Makins, the President’s Award to Shirley H. Clark, the Legal Defense and Justice Award to Sen. Karl Allen, The Martin Luther King Jr. Award to Rev. Dr. Jefferson McDowell, the Coretta Scott King Award to Dr. Angela Peters, and the Michelle Obama Award to Rev. Carolyn Gibbs.
The NAACP Economic Justice Award went to Gregory Fielder, the Fannie Lou Hamer Award to Emma and David Harrison, the Veteran’s Award to Christopher Williams, and the NAACP Entrepreneurs Award to Robert Foggie, who accepted the award for himself and for Willie Foggie, Gerald Foggie and Leroy Foggie.
Look for more pictures in the Wednesday, Jan. 22 issue of  The Laurens County Advertiser and on The Laurens County Advertiser Facebook page.
Posted in News and tagged Freedom Fund, Laurens County NAACP, Laurens SC, NAACP, Nina Turner, Phillip Agnew, Rev. David Kennedy