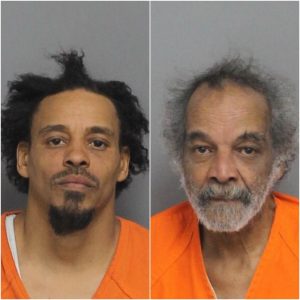 LCAC Supervisor Geoff Brown said all but one of the dogs were pit bulls and part of an alleged dogfighting operation.

A release from the LCSO said, “the majority of (the dogs) were chained up and appeared to be malnourished and in poor health.”

Jerry Westmoreland and Chicuan Amaker, both of the residence on Bryson Road in Fountain Inn, were arrested and booked into the Johnson Detention Center.

LCAC has now seized more than 170 dogs in the past week. An alleged puppy mill in rural Ware Shoals was shut down this past week and 145 dogs and more than 130 other animals were seized and taken in by several different rescue organizations.

“I spoke about the mistreatment of animals just last week, and it is unfortunate that we are dealing with yet another case this week,” said Laurens County Sheriff Don Reynolds. “For someone to treat an animal this way is absolutely despicable, and the motivation is truly greed. Laurens Animal Control has proven to be a valuable resource in these situations, and we are grateful for their hard work and dedication to the animals.”