Laurens, S.C.  – Among the many greetings at the 43rd NAACP Freedom Fund Banquet Saturday night was an announcement that Monday, Jan. 20, had been proclaimed as a Day of Service in Laurens as a way to further honor the memory of Dr. Martin Luther King Jr. 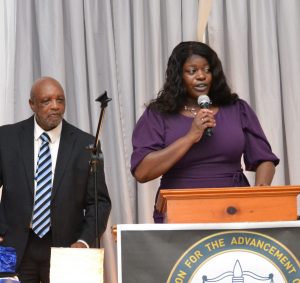 The Laurens County Chapter of the NAACP held its annual banquet Saturday at Springfield Baptist Church in Laurens, and Laurens Police Chief Chrissie Cofield Latimore read the resolution as she was offering greetings on behalf of the City of Laurens and Laurens Mayor Nathan Senn.
“Whereas Dr. Martin Luther King Jr. devoted his life to advancing equality, social justice and opportunity for all,” Latimore said, reading the proclamation. It called upon the people of Laurens to pay tribute to King “though participation in community service projects on Martin Luther King Day and throughout the year.”
Latimore was one of many leaders from Laurens County organizations who brought greetings to the 450+ people in attendance at the event. 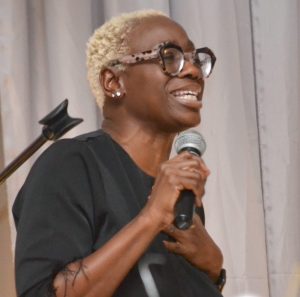 The program included former Ohio State Senator Nina Turner, the keynote speaker, who expressed the need for action against the many injustices and poverty in the nation.

In addition, awards were presented to well over a dozen local residents whose work have made a difference in the Laurens County Chapter of the NAACP or in Laurens County as a whole.
Awards and their winners included the Julia A. Pearson Membership Award, presented to Shirley H. Clark; and the C. D. Beasley Sr. Service Award, given jointly to Rev. David E. Kennedy and his wife, Janice Kennedy.

Among the Presidential Awards was a 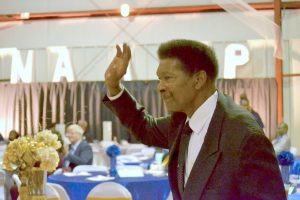 William Makins was presented with a Presidential Recognition Award for his lifetime of service.
Photo by Judith Brown

Recognition Award to William Makins; the President’s Award to Shirley H. Clark; and the Legal Defense and Justice Award to the Honorable Senator Karl Allen.

The Martin Luther King Jr. Award went to the Rev. Dr. Jefferson McDowell: the Coretta Scott King Award to Dr. Angela Peters;
the Michelle Obama Award to Rev. Carolyn Gibbs and the NAACP Economic Justice Award to Gregory Fielder.
The Fannie Lou Hamer Award went to  David and Emma Harrison, the NAACP Veteran’s Award to Christopher Williams and the NAACP Entrepreneur Award went to a family of entrepreneurs.
Robert Foggie was there to accept the awards for himself and for Willie Foggie, Leroy Foggie and Gerald Foggie.
Look for more on the NAACP Freedom Fund Banquet and other MLK weekend events in the Wednesday, Jan. 22, issue of The Laurens County Advertiser.
Posted in News and tagged Community service, Laurens County SC, Laurens SC, Martin Luther King Day, MLK Day, NAACP

SCHSL makes no call on spring sports, to meet again 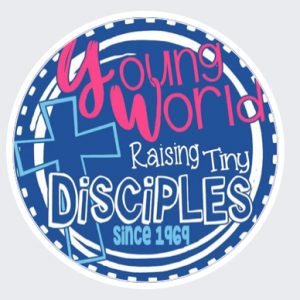 Potential impact for Clinton day care, many families, by COVID-19