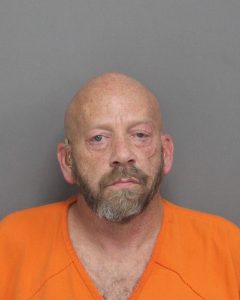 A traffic stop Thursday in Gray Court led to a chase and stand off with Laurens County Sheriff’s Office deputies as well as activation of the county’s SWAT team.

Jonathan Mark Fuller, 60, of Gray Court was arrested and charged with failure to stop for a blue light, felon in possession of a fire arm and ammunition, meth trafficking, possession of a weapon during the commission of a violent crime, resisting arrest, driving under suspension (third offense) and improper display of tag.

The LCSO reports that Fuller was spotted around 9:15 p.m. Thursday near Highway 92 and Warrior Creek Church Road in Gray Court. The vehicle Fuller was driving was bearing a license plate that did not match the vehicle. After a passenger was forced from the vehicle, deputies were told that Fuller had a weapon. Fuller then fled the scene in the vehicle to another nearby location.

Deputies continue to make contact with Fuller from a safe distance, but he refused to comply, according to the LCSO. The county SWAT team, a multi-agency entity, was activated, and the SLED Aviation team was called in as well. Fuller was eventually contacted by cell phone by LCSO Uniform Control Capt. Jared Hunnicutt, and he was eventually taken into custody and booked into the Johnson Detention Center where he remained Friday.

“This situation could have certainly had the worst outcome. I am proud of our SWAT Team for their diligence, dedication, and quick thinking,” said Laurens County Sheriff Don Reynolds. “Our road deputies made sure that those closest to the situation were evacuated and well out of harm’s reach. Captain Hunnicutt’s willingness and ability to communicate with Mr. Fuller, along with the training of the SWAT team made this a successful operation. This individual should have already been in jail, instead of endangering innocent people. Hopefully these reckless actions will remove him from society.”