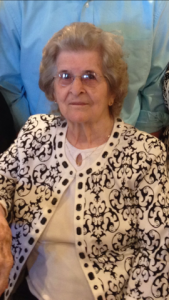 Nannie Glymph Roberts, 97, of Fairview Road and widow of Frank Harley Roberts, Sr., passed away Friday, January 3, 2020, at NHC of Laurens on what would have been her parents’ 100th wedding anniversary.

Born in Newberry, SC she was a daughter of the late Dewey and Ollie Mae DeHines Glymph. Mrs. Roberts was a member of First United Methodist Church and retired after 30 years from Laurens Glass, Inc.

She was predeceased by: sons-in-law, Thad Brown and Campbell Lewis, and a brother, Grady Glymph.

A graveside service will be held 3:00 p.m. Monday, January 6, 2020, at Forest Lawn Cemetery conducted by Rev. Alice MacKeil. The family will receive friends at the cemetery immediately following the graveside.

Memorials may be made to Shriners Hospitals for Children, 950 West Faris Road, Greenville, SC 29605.

The family would like to thank all of the staff of NHC for their loving care of Mrs. Roberts.