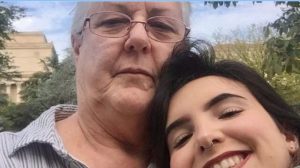 Geannie Greene was able to laugh a little Monday morning, less than two weeks after her home of 26 years in the Fountain Inn area of Laurens County burned to the ground.

She said the tears had come in full force a day earlier, on a gray, rainy Sunday.

“I had my breakdown came last night,” said Greene, who had lived in the home with her daughter, Maddox, until the Dec. 12 fire. “It was the first time I had really had the time to stop and do it because so much had been going on.”

Firefighters said the fire appeared to have been electrical in nature and started in Green’s bedroom.

The home and most everything in it were destroyed. It was also no longer insured due to its age.

Maddox McGibben-Greene, a student at the University of South Carolina Honors College, started a GoFundMe page that had raised more than $16,000 as of Monday morning. The page was initially started to give help the McGibben-Greenes raise enough “for a hotel room and clothes,” but has far exceeded its initial goal and now has surpassed a secondary goal of $15,000.

The GoFundMe page can be found online here.

“I never would have done that for myself,” Geannie Greene said of the fundraiser. “(Maddox) started it, and it because she thought it was a great kid thing to do for your mom.”

Starting over will be expensive, Green said, but she still owns the property where two aging horses and an array of cats still live.

But some things cannot be replaced.

“When I got there I thought I had a fire, but I wasn’t expecting what I saw – it was burned down below the foundation. There was nothing but the brick skirting at the bottom,” Greene said. “I had some things I had carried around with me since I was a little girl. Maddox is my only child, and all those photos are gone. She was a really good student, so I had all the ribbons and awards and trinkets that are just gone now.”

Maddox McKibben-Greene was the Laurens District High School valedictorian in 2016 and is one semester from receiving degrees in journalism-mass communications and global studies from the University of South Carolina.

“I’m sad for her. This is the only home she’s known,” Geannie Greene said. “She lost everything except what she had at school. She’s dealing with things in her own way while she’s home, but she’s worried about me and worried about her grandmother.”

Greene’s mother, Sarah McNay, was diagnosed with cancer and underwent a biopsy on the day the home burned. Greene was at St. Francis Hospital in Greenville when she got the call telling her the home had burned.

Greene, who does housekeeping and pet sitting, said the GoFundMe page funds have been a relief, and she hopes it will allow the family to return to the property at some point. Even so, it’s difficult to make long-term plans due to her mother’s illness.

“I’ll be pet sitting after Christmas, so we’re OK until after the new year,” she said. “then we have to sit down and figure out what to do. … I love it out here. It’s quiet, and I have good neighbors, so I’m hoping I can rebuild something on the property. The short-term plan is to get a travel-trailer or something out here to have a place to escape to.”

Greene, who has returned to the property to feed the animals and sift through the ashes of her home for anything that might be salvaged, said the help the family has received so far has been appreciated as have the prayers for her mother.

“I’ve had so many really wonderful and supportive friends who have offered me places to stay. It’s been overwhelming and humbling to have such an outpouring of love and support,” she said.