Laurens, S.C. – While the level of activity has ebbed and flowed during the past hundred years, generations of 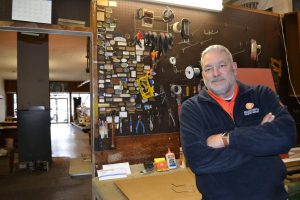 hard workers have continued the tradition of running businesses in the historic downtown, and with the sale of Midtown Paint Shop, the third-generation retailer next to City Hall is closing its doors this month after 50 years on the Laurens square.

The building has been sold, and owner Mike Simmons said like any old building, it will need work before the new owner reopens the building as something other than a paint store. 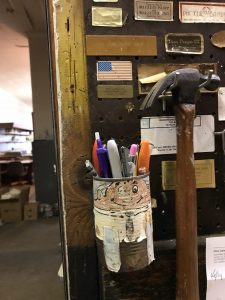 “I’m a third-generation public square merchant,” said Mike Simmons, adding that he is continually thankful he followed his father’s lead rather than using his English and Political science degree from Clemson to become an attorney. That’s what he’d planned. Instead, he married his college sweetheart, Sallie, and decided he’d rather return to the square.

“No business degree could have taught me what I learned working with my father,” Simmons said, referring to Ed Simmons’ innate business acumen, and the perfect sense of how to work with the public and provide high quality products and services.

Ed Simmons had opened Midtown Paint in 1969 after having learned the business at Roper Lumber Company, the business where Mike, at 7 years old, got his first job sweeping floors and dusting shelves after school. Later he sold Advertisers door to door and then when he was older, during the Laurens Mill shift change on Wednesday afternoon. He mowed the entire McMillan ballfields off Farley Avenue for $7.50 for the City of Laurens.

“It’s just what everybody did then,” Simmons said. “Everybody we knew worked.” 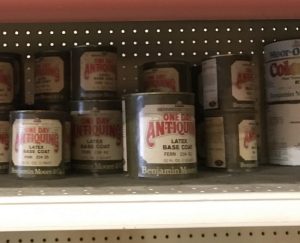 His paternal grandfather, Claude Edward Simmons, was a butcher for the Sanitary Market, a small grocer in what is now The Arbor Florist and Gifts on West Public Square. His maternal grandfather, Gray Bailes, ran Gables Ready to Wear, a clothing store located on West Laurens Street in the building now filled by The Artist’s Coop and The Coffee Roost. Gable had opened the store and bought other downtown buildings in the midst of the depression.

Midtown Paint was a family business from the start, with his mom, Lois, who had an accounting degree, keeping the books, and Mike and his sister Kelly helping to run the store.

The strong work ethic continued for yet another generation, when all three of his daughters worked there, and they benefited by working among their family and extended family.

“And every one of them can count back change without a cash register,” Simmons said.

Now Simmons said he’s ready for a few more hours of golf and many more hours with grandchildren, and he’s the most grateful for his chance to have worked with his family all these years.

“And,” he adds, not really joking, “I get on my knees every day and thank my savior that I didn’t become a lawyer.”