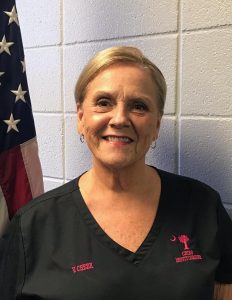 Vickie Cheek is one step closer to being named Laurens County Coroner.

The Laurens County State Legislative Delegation officially recommended Cheek for the job Tuesday, sending a letter to Gov. Henry McMaster signed by all four member of the delegation.

McMaster will then make the appointment as to who will replace the late Nick Nichols as coroner. Nichols, who had one year remaining on his fifth term in office, died on Dec. 9.

Cheek, who was chief deputy coroner under the late Nick Nichols, is in her 19th year with the coroner’s office, was among three candidates interviewed for the position by the delegation.

“Vickie has the experience, knowledge and compassionate heart to serve out the term as coroner,” said Rep. Mark Willis (R-Fountain Inn).

Willis said he expects a final decision to be made following the mandated background checks through SLED and other government offices.

Willis said the process is not normally lengthy, but due to the Christmas and New Year’s holidays, the appointment could take some extra time.

Support from the entire delegation, which includes Sen. Danny Verdin (R-Laurens), Rep. Stewart Jones (R-Laurens) and Rep. Doug Gilliam (R-Union), was needed in order to make the recommendation to McMaster.

Willis said Cheek’s years of service and experience were deciding factors as was vocal support for her from the community. Cheek ran the day-to-day operations of the office for extended periods as Nichols battled through health issues over the past few years.

While making the appointment, the delegation also expressed sympathy to Nichols’ family with gratitude for his service to Laurens County.

“Mr. Nichols’ dedication went beyond reproach,” Willis said. “He touched many lives, and we will always be grateful for his service.”