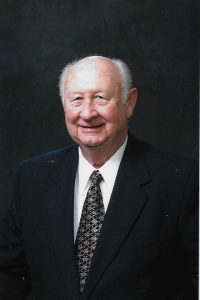 James (Jim/Big Jim) Elmore Martin passed away in the evening of December 7, 2019, peacefully and unexpectedly at home.  He was born in Laurens, SC on 1/19/1935 and is predeceased by his father, John Turner Martin, brother John T. Martin Jr. and his mother, Louise S. Martin.

James grew up in Laurens, SC and graduated Laurens High School in 1953.  He lettered in football (Senior Quarterback), basketball, track and golf and was president of his class all 4 years.

James graduated from Wofford University (1957) and Vanderbilt University (1959) with a BS/MS in math with a minor in physics.  He married his childhood sweetheart Patricia Anne Dominick (Pat graduated Laurens HS 1953) in 1957 and they raised three children: Jim, Lee, and Marian.  He served as a Second Lieutenant in the army as a Nike missile artillery officer at Fort Bliss, Texas.

In November 1959,  he joined IBM living in Winston Salem NC and was  promoted to System Engineer Manager (Baltimore MD), Manager of Technical Services in 1968 (New Jersey)and  Senior Marketing Representative (Atlanta) where he retired after a successful career in 1991.

James was an active Council member of the  Georgia Salzburger Society. Throughout his life, he was a devoted servant of the Lord as an active Christian in Lutheran Churches.  He served on Church Councils, taught Sunday School, continued to be an active Stephen Minister and was involved with many ministries. He supported the churches financially and through regular participation, including  leading and organizing Pig Roasts with Pat. He was active in the Via De Christo community.  His joyous spirit was contagious and his jokes entertained all.

He was an avid golfer belonging to Alpharetta Athletic Club.  He loved traveling, cruising and vacationing with his family.  He was especially fond of his 8 grandchildren (Katie, John, Joshua, Casey [spouse Amber], Sam, Joseph, Michael, and Matthew) and his great granddaughters (Felicia Mae and Alexis).

James is survived by his wife Pat.  They celebrated their 62nd anniversary this past June.  He is survived by two sons Jim and Lee (spouse Leslea) and his daughter Marian (spouse Joe) , 8 grandchildren and two great-granddaughters.