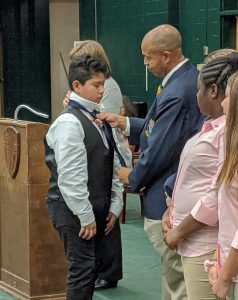 Sometimes they walked near the podium set up in the Laurens District High School gym one by one. Sometimes they came in large groups.

But nearly 200 Laurens County District 55 students – minus a few middle school basketball players who had games on their schedules – came to be installed in the district’s Ladies and Gentlemen’s clubs Monday night.

The clubs were founded four years ago soon after District 55 Superintendent Dr. Stephen Peters arrived in Laurens County looking for a way to reach students and improve their lives beyond the classroom.

“I never in my wildest imagination saw this happening,” Peters said. “This is way bigger than Stephen Peters. This is God’s work. It’s a mission on a mission field and our young people today need everything we can give them to catch them. They need a safety net, but first they need the basics that we got – yes ma’am, no sir, excuse me. People underestimate the importance of those soft skills. This club, No. 1, makes them feel better about themselves. When they look good they feel good, when they feel good they do good.”

Brothers from Hickory Tavern Middle School were inducted. So were LDHS students who had not joined the clubs before. Students from every school in the district were represented.

The District 55 administration touted the district as the only one in the country to sponsor Ladies and Gentlemen’s clubs in every school in the district.

“It helps me as a person, basically, grow,” said LDHS senior Cam Byrd who joined the high school’s Gentlemen’s Club when he was a freshman, and the club was brand new to the district.

Byrd said he would recommend to all the new members of the clubs to “engage” with the club and remain committed throughout their school years. 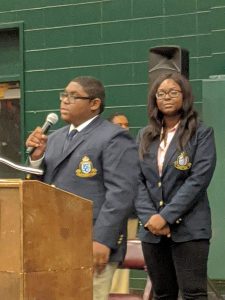 Sheresa Sullivan, a LDHS senior and president of the Ladies Club, started with the club as a junior but quickly saw its value, especially when building relationships.

LDHS junior Jermarius Evans said the draw for him four years ago was his desire to serve his school and community.

It still is – and that desire has been heightened by his membership in the Gentlemen’s Club, particularly as its reach expanded at the high school level.

“I get to go into the community and serve my school and be a better leader,” Evans said. “With the Gentlemen’s Club, I get to serve so many people in the community, and that’s what I love so much.”

Evans said he plans on attending Winthrop University in Rock Hill and then return to teach at LDHS.

Sullivan said her plans are not set in stone, but the Ladies Club has helped prepare her for whatever comes after graduation in June.

“I graduate in about six months, so just finding out about this life plan and what I truly want to do – that’s the hardest part,” she said. “But I’m ready for this new chapter in my life.”