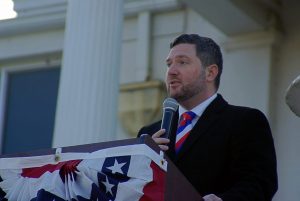 Laurens Mayor Nathan Senn not only celebrated local veterans for their military service, he pointed out their long history of civic involvement.

Senn pointed out a 1921 “transatlantic furor” caused by Col. George Harvey, then U.S. Ambassador to Great Britan, who criticized America’s role in World War I and implied that its military was taken to the battlefields of Europe under “false pretenses.”

He also pointed at the response from local veterans from the newly formed Post 25, who were determined to be involved in the civic future of the county and the country.

“The post unanimously voted to denounce the speech of Ambassador Harvey as ‘the most selfish, most un-American and the most infamous falsehood ever delivered by an American diplomat in a foreign country,’” Senn said. “Further, they noted that his speech was “characterized as an insult to every man who served in the world war.’” 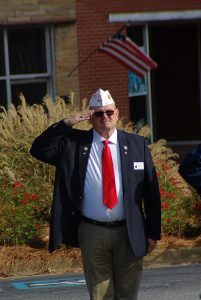 Jones, who was elected to the South Carolina House of Representatives earlier this year, brought the conversation forward for today’s veterans. He said the state legislature is working to improve the lives of veterans by streamlining the process for veteran’s benefits and for receiving care at VA hospitals.

But Jones was also thankful for the service of the veterans assembled on the Historic Square and those who were not there, pointing especially at the citizen soldiers, sailors and airmen in the U.S. military.

“They are fathers, wives, parents, small business owners, inventors, teachers, farmers and preachers,” Jones said. “They are everyday people who do uncommon and incredible things.”

Post 25 Commander Jim Peterson ended the observance with a message to the veterans in attendance.

“Happy Veterans Day,” Peterson said. “I know it’s a memorial time, but it’s also a day when we smile and remember who we are.” 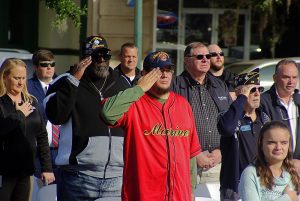 Veterans and other attendees salute during the National Anthem Monday. 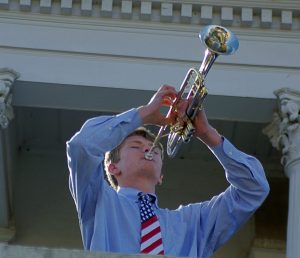