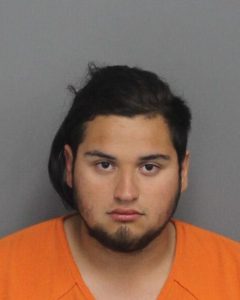 Local law enforcement officials responded to a second murder in Laurens County in less than a week.

The Laurens County Sheriff’s Office arrested a Clinton man early Monday morning after he allegedly shot and killed another man at a residence on Highway 72 East in Clinton.

Osvaldo Antonio Flores, 20, is charged with murder and possession of a weapon during the commission of a violent crime. Flores remained in the Johnson Detention Center Tuesday.

Both Flores and the victim are listed as residents of the same address on Highway 72 East where the shooting occurred.

Flores was arrested without incident at the scene and transferred to the Johnson Detention Center. The victim died later at Prisma Health Laurens County.

The LCSO said the incident is still under investigation and had no comment on the motive for the shooting.