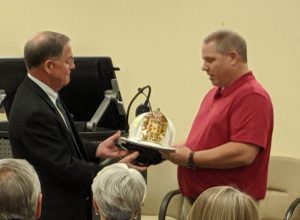 “The City of Laurens, Clinton city and the county are much better places because of his service,” said former Laurens Mayor John Stankus, who was also worked with Morse as a police officer.

Stankus was among several peers and friends who lauded Morse as both a lawman and a mentor.

Morse’s wife, Barbara, said at the beginning of the program what most of those in attendance already knew – that her husband was not someone who needed recognition or a “dog and pony show,” but he was convinced by friends and family to allow the program to take place. 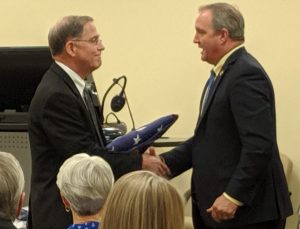 Robin Morse, left, is presented with a flag that flew over the U.S. Capital Tuesday by Rep. Jeff Duncan (R-S.C.) (Photo by John Clayton)

Morse spent 17½ years as police chief in Laurens before moving on to take over Clinton Public Safety in 2013. He remained at the helm there until the City of Clinton decided to separate its police and fire divisions in 2018. He has since been working as a deputy corner for the Laurens County Coroner’s Office though he said he is “retired” from law enforcement.

His former colleagues lauded Morse as a man ahead of his time in some respects as he brought local law enforcement agencies into the modern era with computers and other technology.

Morse was presented with his personal fire helmet and a leather helmet from the citizens of Clinton from former fire Capt. Scott Shiflett, and U.S. Rep. Jeff Duncan (R-S.C.) gave Morse a flag that flew over the U.S. Capitol in Morse’s honor.

As a young deputy with the Laurens County Sheriff’s Office, Morse was shot in the abdomen, an injury that caused him to go through several surgeries and months of rehabilitation.

Thirty-six years after being shot, he was awarded the Purple Heart for the injury in the line of duty, and was lured to that ceremony with the promise of a new high-tech flashlight, said former Laurens County Sheriff Ricky Chastain.

“Most law enforcement officers would have found another profession after that,” Chastain said. “But Chief found something good out of something terrible.”

Chastain said Morse stayed in touch with the man who shot him as the man served his prison sentence, visiting him and forgiving him for the incident.

And during Tuesday’s program, Morse finally received his long-awaited flashlight – engraved with his name with a thank you for his service.