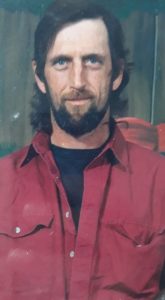 Randy LeRoy “Cowboy” Lambert, age 64, passed away Tuesday, November 5, 2019 at the home of his daughter.

He was born in Athens, GA and was a son of Nettie R. Turner and the late Talmadge Lambert. Mr. Lambert was a proud veteran and served his country as a member of the US Navy.

In addition to his mother, he is survived by his daughters, Wendy Medlin (Adam Gaskins) of Clinton, Tammy Jean Brookshire (Tony) of Lexington, SC, his brother, Melvin Lambert of Waterloo; his two sisters, Sandra Crowder of Gray Court and Sharon Nelson of Hickory Tavern; his former wife, Janet Griffin of Joanna; his best friend, Roger Cutshall; his ten grandchildren and his five great-grandchildren.

A Memorial Service will be held Saturday, November 9, 2019 at 2 PM at the Gray Funeral Home Chapel of Clinton.

The family will receive friends at the home of his daughter, Wendy Medlin, 1315 Sunset Boulevard, Clinton, SC 29325.