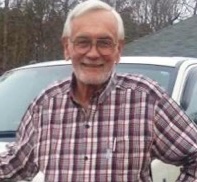 Charles Edward Barden, 83, of 614 Dixon Road and husband of the late Helen Trammel Barden passed away Monday, November 4, 2019, at his home.

Born in Jetersville, VA, he was a son of the late Richard Archer and Mildred Lee Ranson Barden. Mr. Barden was a retired truck driver and an Air Force veteran. He attended First Baptist Church and was also a part-time employee with Smith Chevrolet.

In addition to his wife and parents, he was predeceased by a son, Charles R. Barden, brothers, Richard L. Barden and William A. Barden; and a sister, Barbara A. Barden.

A memorial service will be held 1:00 p.m. Wednesday, November 6, 2019, at The Kennedy Mortuary Chapel conducted by Rev. Rickey Letson. The family will receive friends at the mortuary immediately following the memorial service.