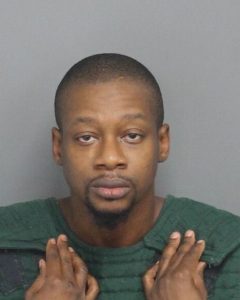 A Simpsonville man has been arrested and charged with the murder Wednesday of his ex-girlfriend in Fountain Inn.

Aaron Hewitt, 42, was arrested by Fountain Inn police and transported to the Johnson Detention Center Wednesday. Hewitt, who was identified as the victim’s ex-boyfriend, is charged with murder, burglary and possession of a weapon during a violent crime. He was denied bond.

The victim was identified by the Laurens County Coroner’s Office as Aqua Barksdale, 29, of James Jackson Road in Fountain Inn. An autopsy was to be performed today on the victim.

According to police, the murder stemmed from a domestic situation between Hewitt and Barksdale. Reports said the victim had children who are now staying with members of her family.

The death was the second murder to occur in the Fountainbrook neighborhood of Fountain Inn this month. On Oct. 1, another domestic dispute apparently led to the shooting death of Justin Durham, 30, of Taylors.