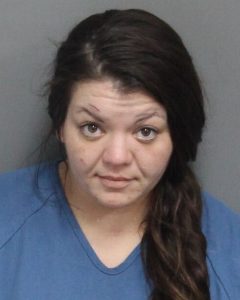 A Fountain Inn woman received a 22-year prison sentence after pleading guilty to a felony DUI charge Monday stemming from a June 2018 crash that killed a Laurens farmhand.

Tara Ann Mahan, 35, entered a guilty plea in 8th Circuit Court at the Hillcrest Judicial Complex. Judge Frank Addy, Jr. handed down the sentence. Mahan pleaded guilt to felony DUI resulting in death and one count of methamphetamine possession. Addy sentenced her to the 22 years on the DUI charge and three years on the possession charge to run concurrently.

Mahan was out of jail on bond from a previous DUI charge when the vehicle she was driving struck a tractor driven by Wesley Robinson, who was driving a tractor along Highway 308 near Fleming Mill Road.

Robinson, 29, was pronounced dead at the scene of the accident. The Clemson graduate worked for Eastglen Dairy in Laurens.

“It is devastating to think about this hard-working young man being senselessly killed on our roads during the middle of the day by an intoxicated and completely unproductive young woman like Tara Mahan,” 8th Circuit Solicitor David Stumbo said. “It is my hope and prayer that Wesley Robinson’s family and friends can gain some sense of closure today.”

Prosecutors said that toxicology results revealed that Mahan had both methamphetamine and marijuana in her system at the time of the fatal crash. Her vehicle struck the tractor from the rear, causing it to overturn.

Stumbo praised the work of his staff. The case was handled by Deputy Solicitor Warren Mowry and Assistant Solicitor Wade Dowtin.