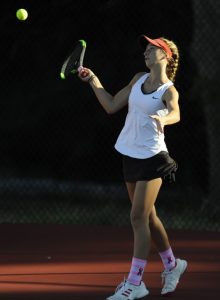 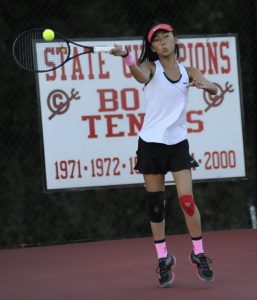 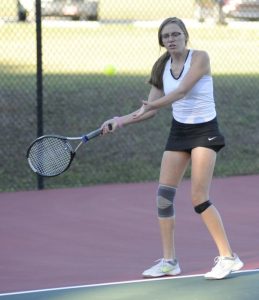 The Clinton Red Devils girls’ tennis team did what any top seed is supposed to do against a lower-seeded playoff opponent Wednesday at Clinton Middle School – squash the hopes of an upset as soon as possible.

Clinton, the reigning Region 3-3A champion, rolled through its first round of the state playoffs with a 6-0 decision over Indian Land to reach Monday’s second round. The Red Devils will host Powdersville in the second-round match, which begins at 5 p.m. Clinton last faced Powdersville two years ago in the state playoffs, with Clinton winning the match.

Clinton advanced with a thoroughly impressive showing, starting with Mary Catherine Dailey at No. 1 singles. Dailey was steady with many of her shots during her match with Carly Gomes, rolling to a 6-1, 6-0 victory, but did struggle at times with her first serve. The issues with her first serve helped lead to the only break chance Gomes had in the match, in Game 5 of the first set, where Gomes was able to break and keep the first set somewhat competitive – even through she was down 1-4 with the break of serve.

From that game on Dailey simply steadied herself and reclaimed control, winning the final eight games will losing just nine points in those games.

The No. 2 doubles team of Kaitey Threatt and Grace Johnson won their match, 6-2, 6-1, over Aestas Hodge and Emma Lechner.

Mauldin 7, Laurens 0: The Raiders were able to get back to the postseason, but facing the No. 1 seed Mavericks proved too tough to overcome.

Kelsie Little (No. 5 singles) came the closest to winning a set in her match, but ultimately fell 6-2, 7-5.

Mauldin won all of the other matches contested – aside from No. 1 doubles – in straight sets. The No. 1 doubles match was played as a pro-set match.

EDITOR’S NOTE: This story is updated with Powdersville advancing to face Clinton Monday.